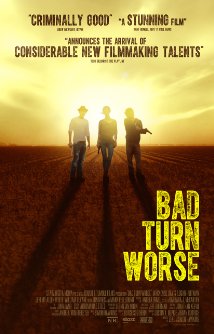 [xrr rating=2.5/5]The impressively banal crime film Bad Turn Worse couches itself in the comforting familiarity of a tired old narrative. It begins with a small, not-too-clever heist and works its leisurely way up to a much bigger, even dumber one, filling much of the space in between with characters who broadly announce their belief in the impossibility of crafting any kind of a new story. Directors Simon and Zeke Hawkins and screenwriter Dutch Southern presumably added this arch conceit because they wholeheartedly agree. They know they don’t have a new story to tell, but they aim to prove they’re damn proud of their tired old one. To their credit, they’re aces at recreating the moods of other, better movies. But they make the mistake of thinking that giving up on freshness is a fresh thing to do.

The character that lets the audience know that Bad Turn Worse is intended to be unoriginal makes up one third of the movie’s central love triangle. Sue (Mackenzie Evans) is a bookish beauty from the unnamed Texas town where the goings on go down. She’s dating cowboy lunkhead BJ (Logan Huffman), and both of them are best friends with shy, sensitive Bobby (Jeremy Allen White), though it takes BJ a while to figure out that Sue and Bobby spend so much time together for a reason. In one of the opening scenes, Sue tries to prepare Bobby for the intellectual world of post-secondary ed – he’s off to college in a few days, and he’ll have to read books—by feeding him an old Jim Thompson quote. “’There are 32 ways to tell a story but only one plot, that things are never what they seem.’” He nods like an idiot (White has a natural actor’s gift for projecting sweet dumbness), and agrees. The brothers Hawkins, who come off as narratively lazy rather than dumb, seem to feel that this quote is all the protection they need to retread the Southern-fried crime caper with impunity.

Sue and Bobby’s plan to head off to college leaves BJ back in town, stuck in his job as a mule for low-level gangster Giff (Mark Pellegrino), who is himself a hired hand for a South Texas kingpin known only as Big Red. The plot begins to get vague just after Giff fingers BJ and Bobby for a minor burglary and forces them to plan and execute a much larger one for recompense. The middle of the film is a blur of cinematographer Jeff Bierman’s moody blues and grays, through which the three kids drift, repeating and re-repeating their plan to get Giff back his money while mucking up their relationships in ways that don’t effect the overall plot. Occasionally, Pellegrino is allowed to bring the movie to life; Giff gnashes and cackles his way through his scenes, outlandishly threatening the kids while over-explaining the not-complicated intricacies of his villainous plans.

In its final scenes, the movie’s familiarity remains, but its comfort is fully drained. Bad Turn Worse starts as an unambitious genre exercise. By the time it’s over,, it confirms the suspicion that all the self-aware dialogue and lackadaisical plot turns haven’t been in service of any greater vision. The only mystery as the credits roll is whether the director-brothers really think they’ve accomplished a genre upturning here.

On the plus side, there are times when Pellegrino is genuinely scary. There are moments – sparse but palpable – when the love triangle kids come off as more than beautiful twenty-somethings slumming in a B-picture while waiting to audition for a super hero movie. And there are moments when the decision to set the story in a windy, gray Texas landscape seems inspired.

Texas is so overdone as a seedy spot to set backwoods wrongdoings that its middle must by now be charred black. But most seedy Texas crime films cast the state as a sweltering, good ol’ boy-ridden playpen of corruption. The good ol’ boys and corruption haven’t gone anywhere, but the Hawkins have shot the state as if it’s a serious place to live, the way Terrence Malick or Jeff Nichols would. The best thing about this film is the way it looks, and the fact that the way it looks isn’t an accident. The directors understand that their material is staid, and think they can overcome that fact by admitting it up front. They also have a talent for creating mood. The two traits together make for a let down of a first feature, but strongly suggest that if they pushed themselves harder, the brothers could produce a second or third film that might be pretty darn compelling.