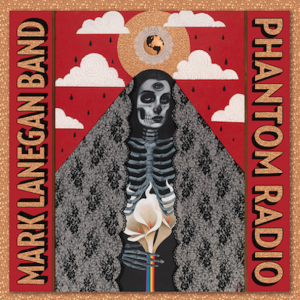 [xrr rating=3.5/5]Mark Lanegan has one of those voices that is distinct from the first note. It’s not quite Tom Waits’ blackened croak, but it has the gritty edge of an old worn-out boot trying singing Johnny Cash covers. Lanegan’s voice has a power all its own that’s been obvious from the heyday of Screaming Trees, and Josh Homme put Lanegan’s well-crafted growl to work on Queens of the Stone Age songs like “A Song for the Dead,” turning him into a grim reaper behind the microphone. His new album Phantom Radio feels like a spaghetti western acid trip, but Lanegan sounds more human than ever, for better and for worse.

Lanegan is at his best when dusk creeps into his music. “I Am the Wolf” is a three and a half minute reminder of how mesmerizing his voice can be over a sparse background. Lanegan spins the kind of stories that would make him a natural for the soundtrack of the Wild West video game Red Dead Redemption. On opening track “Harvest Home,” the singer claims that, “black is my name” with just the right tobacco filled croon over a twangy guitar lead. He lets a teardrop slide into his vocal cords on the evocative and biblical “Judgment Time,” where he plays a “strung out angel” overseeing the end of days. “I saw the feet of pilgrims bleeding/ I saw whole cities drowning/ I saw whole armies dying” he sighs, accompanied only by a humming guitar and dreary organ.

Phantom Radio was recorded in part on a phone, and Lanegan relied on the drum machine app “FunkBox” for much of the album’s percussion. This technological angle shows in unflattering ways. The odd herky-jerky motions and sparkling synths of “The Killing Season” make weak music for heavy lyrics like “tonight they hang Jerry.” The slicker sounds of “Seventh Day” and “Torn Red Heart” feel at odds with Lanegan’s charismatic delivery. Strangely, the singer does not have much faith in his talents as a front man. He has one of the most compelling voices in rock, but too often, he hides himself behind gaudy production. Phantom Radio is at its best when he takes the lead over the backgrounds. His voice is well suited to the ¾ time of “Waltzing in Blue,” and “The Wild People” deserves to be tapped for closing credits on a modern-day western. Finale “Death Trip to Tulsa” feels like a slightly mellowed out B-side from QOTSA’s Songs for the Deaf.

Phantom Radio is an oddly engaging collection of camp fire tales. If Lanegan had been content to stick to his howling storytelling, it may well have been singer-songwriter album of the year. Making records with his phone doesn’t always work, but if this means he’ll make music faster, I’m all for it.