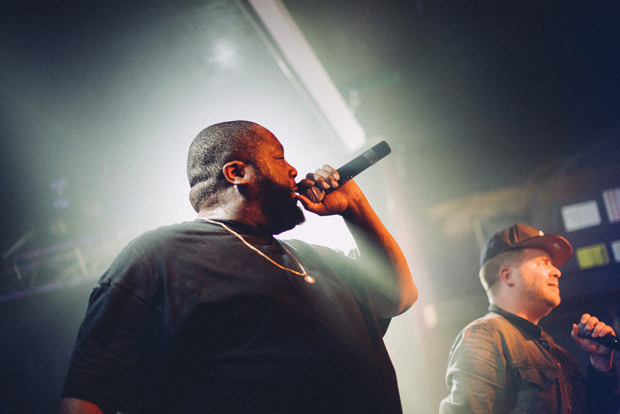 Some cities put athlete spectators up on the jumbotron but in Portland, Oregon, we get Carrie Brownstein, of Sleater-Kinney fame, up there at the Blazers games. Brownstein sightings around town occur at the hippest events: a Savages concert, on a “Portlandia” shoot. Run the Jewels, the excellent collaboration between rappers El-P and Killer Mike, not only had Brownstein lurking in the wings of the Hawthorne Theatre’s stage—she introduced the damned show. How’s that for a seal of coolness?

Killer Mike is one of the most dominant rappers in the game, a hulking man who can commandeer a stage without the help of hype men or other hangers-on. Hell, the new Run the Jewels albums kicks off with Mike boldly claiming that he will “bang this bitch the fuck out.” Yet, this Run the Jewels performance felt like an El-P solo show. Killer Mike was up there, but it was hard to hear him. Towards the end of the show, he admitted that he had lost his voice in San Francisco. It’s a shame. Run the Jewels is the sum of the talent of both these men.

Mike’s performance wasn’t the biggest problem of the evening. The Hawthorne Theatre has always been a danky, sweaty dungeon with no air circulation. But on a night where temperatures plunged below freezing, the venue somehow managed to be suffocatingly hot. El-P complained about the heat numerous times during the set. Killer Mike just looked like he was going to faint. I don’t blame him. I had to move from the sweaty masses in the front to the back of the theatre after a few songs to avoid passing out myself. It sucks when you have to exit the theatre every two songs to gulp fresh air.

In prime conditions, El-P and Killer Mike are excellent showmen who know how to bang the fuck out of a rap show. This summer, I saw Mike perform at a private show here in Portland and was completely blown away. I wanted to feel that way during the Run the Jewels set. Mostly, I was just worried about the oxygen/carbon dioxide ratio in the room and whether I would asphyxiate or suffer from dehydration first. You can’t help but know the guys up on stage were suffering even worse.