As recently as this past September, David Lynch, answering questions about Eraserhead for its recent Criterion release, said, “No one, to my knowledge, has ever seen the film the way I see it. The interpretation of what it’s all about has never been my interpretation.”

As Lynch suggests here, and makes more explicit elsewhere, his films are less about the stories they tell than the primacy of sound and image. That said, much has been written about the latter with regard to Eraserhead (I’ll point to Michel Chion’s book David Lynch as a favorite). It seems to me that while narratives are not the sticking point of Lynch’s films, they nonetheless have a great deal of thematic resonance. As for Eraserhead, every time I watch the film I have a different interpretation. Sure, I buy into it as a film about anxieties of parenthood and alienation in an industrial setting, but it wasn’t until I looked closer that it occurred to me that Henry (Jack Nance) killed his child as a way of removing himself from responsibilities and a loveless marriage, all while making himself available to the Beautiful Girl Across the Hall (Judith Anna Roberts).
The film’s central sequence begins when Beautiful Girl invites herself into Henry’s room. He tries rather frantically to keep his alien-child silent, and when Beautiful Girl sees it, she seems to sink into Henry’s bed.

At this point, a close-up of her, followed by a shot of the Lady in the Radiator (Laurel Near) suggests that the Lady in the Radiator is now in Beautiful Girl’s imaginary space. At the end of this surreal sequence, just prior to Henry’s head falling into the land of the pencil factory, we see a shot of Henry’s body with a head like the baby’s. After the scene in the pencil factory, Henry wakes up alone and opens his door to see Beautiful Girl entering her own apartment with another man. We get a close-up of Beautiful Girl again, and the reverse shot sees Henry’s head replaced with that of the alien-child, suggesting that this is how she views him.

Of particular importance, the two close-ups following shots of Henry’s look—first when Beautiful Girl invites herself into his apartment and again when he sees her with the other man—see her face framed against black space. In effect, this positions her, from the point of view of Henry, in a dream space, outside the world as it exists: idealized, sexualized and fetishized, an object of his desire. Additionally, the soundscape that takes over after Beautiful Girl sinks into the bed and the sound of her reverse-shot (the one that sees Henry with the head of the alien-baby) is of a much lower and muted register, as if her gaze exist apart from Henry’s natural environment, one marked by harsher, more grating noises. In any case, that Beautiful Girl entering Henry’s apartment is portrayed with the dream-space close-up, and that the cut from her and Henry talking to the two kissing on the bed is abrupt, suggests that those sequences are primarily Henry’s imaginings. Similarly, Henry with the head of the deformed baby shows that Beautiful Girl cannot separate him from his child, and subsequent shots of Henry show that his new head is far from literal. 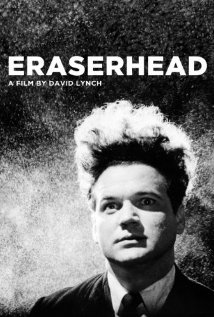 Indeed, much of what we see in the film seems to be an externalized representation of Henry’s anxieties. Certainly the family of his girlfriend, Mary X (Charlotte Stewart,) is strange, distant and inexplicable. It evokes parental and romantic anxieties, using the sound and sight of a litter of puppies to present breast-feeding as parasitic; it perverts industrialization with the strange happenings of the “manmade chickens”; it turns the birth of Mary’s child into something not quite natural. These are far more than symbols, though. That the Man in the Planet, a character pulling levers and our entry point into the world of Eraserhead, is played by Jack Fisk—an art and production designer and someone whose job is, almost literally, to create worlds—suggests that the world of Eraserhead, which we and the alien-baby enter into through a white hole, is a created world rather than a natural world. With that said, perhaps the entire film, as we see it, is not just Henry’s subjective experience, but the world that he creates to explain his actions.

Seen this way, Beautiful Girl seeing Henry with the baby’s head is not necessarily the way she perceives him, but rather a reason Henry creates or an anxiety he projects onto her to explain her lack of interest. Trapped in a marriage to a woman he does not love, but unable to pursue the woman of his desire because of societal codes, Henry kills his baby in an effort to disassociate himself from it in the eyes of Beautiful Girl. To justify his actions, he conjures up a world in which his girlfriend and her family are more than a little strange, his relationship to the child is questionable and the child itself is inhuman. He even thinks Beautiful Girl is interested in him in an attempt to give his crimes a payoff. The Lady in the Radiator, meanwhile, is a reminder of what he is really doing, his conscious telling him to stop and a twisted, suicidal promise that everything will be better “In Heaven.” Unable to fully escape his guilt or craft a world in which Beautiful Girl is truly attracted to him, he embraces Lady, as if committing suicide.

Seen this way, it is worth noting that self-made narratives disguising harsh, unrecognizable truths recur throughout Lynch’s oeuvre. Think of Laura Palmer displacing the identity of her repeated sexual-assaulter with a demonic spirit in Twin Peaks: Fire Walk with Me; of Fred’s creation of Pete and transformation of Renee into Alice as a way of denying that he killed her in Lost Highway; of Alvin Straight’s passive voice and vague answers that conceal his responsibility in harming his grand kids in The Straight Story; of Betty Elms’ Classic Hollywood fantasy concealing her failure to make it big in Mulholland Drive. Even Jeffrey and Sandy, the heroes of Blue Velvet, see the case of Dorothy Vallens as an exciting detective fiction in which they star. The difference with Eraserhead is that what Henry did is so awful that he is forced to create a world greatly obscuring his wrongdoings. Reality is too harsh even for us viewers.

Feel free to disagree with my interpretation. The beauty of Eraserhead is that its abstractions make it twisted and open-ended in spite of a rather linear story and recognizable syntax. Indeed, much of Lynch’s innovation comes in sound editing. We often hear uncomfortable sounds before we can identify them, as with the litter of puppies, or the way a stinger on an organ when the baby gets sick bleeds seamlessly into the hum of a radiator. At the same time, when Lynch adheres to conventional visual patterns, he tends to change the soundscape from one shot to the next, as described above—a system that Lynch would hone, play with and complicate throughout his career. This makes it not only a great debut but a great entry point to Lynch’s oeuvre. It teaches viewers that Lynch films are less about clearly defined narratives and answering questions, however abstract or concrete they are, than they are about exploring themes and posing questions through sound and image.

I could elaborate further, but with Lynch, striving for a firm answer is not the point. With his films, everyone gets to have their own ideas. Parenthood, romance, longing, social alienation and industrialization are themes and ideas broad enough and clear enough that, with a film like Eraserhead (and a filmmaker as good as Lynch), any viewer is free to get something different from it. In this regard, Lynch may have made more “accessible” films than Eraserhead, but at his best he never departed far from its open-ended, viewer-friendly and inviting spirit. As with Lynch’s subsequent films, the sensory experience of watching Eraserhead is unforgettable. But like Lynch’s later work, multiple viewings allow one to parse out a clearer interpretation of the narrative, and the film’s secrets and rewards multiply as a result.