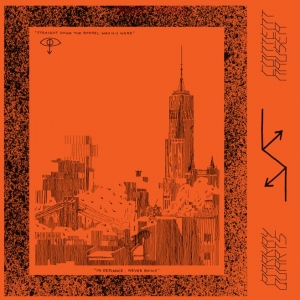 [xrr rating=3.5/5]“Everyday it starts/ Anxiety,” Andrew Savage talk-sings on Content Nausea’s leadoff track, a three-minute ode to a panic attack that builds slowly to a guitar freak-out before proclaiming “And I never sleep/ But I go to bed/And I never sleep.” The paranoia increases on the revved-up title track about our overexposure —our phones, and therefore brains—to a never-ending stream of content. “Too much data/ Too much tension” over droning guitars, he sings about how we’re left feeling more connected but more alone.

Clearly, anxiety and paranoia have been on Savage’s mind for some time. Before the release of Sunbathing Animal last June, he told Grantland, “I don’t really like being part of a content-generating device for people to get hits on their website. To me, that spoils it. But also, I really don’t like talking about press, because it makes me seem ungrateful. It’s not the popularity that gives me anxiety, because naturally I want people to hear the music.”

Nausea is the second release by the band’s self-described alter-ego, Parkay Quarts. Written and recorded on a four-track in just two weeks, it’s a complement to the proper Parquet Courts’ Sunbathing Animal and the run they’ve made since gaining popularity in 2012. This makes a band that has not been around that long feel like they’ve existed forever. And, while their output is by no means excessive, it’s frequently great, raising our expectations because each record has managed to feel fresh and new while retaining the same underlying sound.

After they formed in 2010, they relocated to New York and were dominating year-end lists three years later with Light Up Gold, a wider release of their 2012 LP. Everyone’s heads exploded. They were compared to Pavement, Television, the Velvets, and were feeling destined for the nostalgia bin when they released the Tally All the Things That You Broke EP in October of 2013. If they didn’t want critics comparing them to their favorite ‘90s guitar bands, maybe they shouldn’t have executed them so supremely.

Content Nausea is a stellar record that shows a band exploring other directions from previous endeavors while still figuring it all out. They reinvent the 13th Floor Elevators’ “Slide Machine” as their own, and “Pretty Machines” is a playful jam about “bullshit and dreams” never realized, set happily to a saxophone. Over and over Nausea touches on themes of how modern adulthood causes anxiety that no tears, beers, or punk songs can cure in its less than 40-minutes of garage-rock gems. Then, suddenly, it takes a left turn with “These Boots,” the unexpected cover of Nancy Sinatra’s “These Boots are Made for Walking” that proves the band is still into fucking around.

The 12th and final track, “Uncast Shadow of a Southern Myth,” runs almost seven-minutes and begins as a drifting, country-tinged song about “two men colliding in the deep South,” according to Savage. “Forgive those who trespass against us/ Began as the dead intruder’s plea/ Into the very muzzle I’d once peered into/ He gives the last words he will speak,” he sings somberly. It’s a lyrically heavy ballad, until the song finally reaches is explosive finish. Influenced by Townes Van Zandt and Dylan, it’s a confident change of course that cements Content Nausea as a record that could be a glimpse of what’s come.

Jessica Pratt: On Your Own Love Again