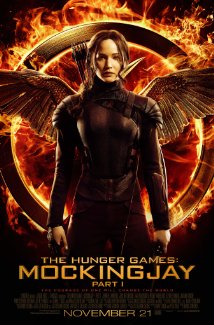 [xrr rating=2.0/5]Without the hook of its titular games in the mix, The Hunger Games: Mockingjay – Part 1, plays like a rote dystopian thriller. We’ve seen this before: a ragtag group of rebels fighting against an overbearing government, slowly gaining ground despite horrific odds. Slow and steady, this third volume in the four films based on Suzanne Collins’ popular trilogy of books is all set-up, an unnecessary splitting of the final book that doesn’t quicken or excite until its final moments.

Harry Potter suffered the same faint when final book The Deathly Hallows was cut into two films, the first completely unremarkable, easily the worst of the franchise. Mockingjay- Part 1 seems like it’s building towards something, but that something never happens in these two hours. We’re going to have to wait another year to find out, unless you decide to cheat and read the book instead. But with such an uninspired lead-in, how could anyone be excited for a second half that’s 12 months away?

Even the stars are feeling the malaise as Mockingjay- Part 1 features what could be Jennifer Lawrence’s worst performance. There is a lot of open-mouthed gawped and unconvincing shouting, but then again Lawrence isn’t really given much to do except mope around obliterated towns and sit around in the rebel headquarters while the higher powers decide the next best course of action. Lawrence’s Katniss Everdeen is utterly broken. She spends the entire film looking for a spark to reignite her anger.

There is nothing to blame for this slog except simple greed. The final Harry Potter movie was spectacular. It’s easy to believe that Mockingjay- Part 2 will be spectacular, as well. But is it fair to an audience to create a fourth part to a trilogy? If Mockingjay- Part 1 were a viable film, more Hunger Games is definitely something exciting. But it’s not. It’s like watching a DVD bonus feature, a whole lot of nothing to rook audiences out of $12 more.

For those who need a synopsis: Mockingjay- Part 1 begins shortly after The Hunger Games: Catching Fire where Katniss has been secreted away to District 13 by rebels fighting against the vicious President Snow (Donald Sutherland). In this installment we meet President Coin (Julianne Moore) who plans to use Katniss and her celebrity status in propaganda films to encourage rebellion against Snow. But Katniss isn’t interested. She is more concerned about captured friend Peeta Mellark (Josh Hutcherson), who has been abducted by President Snow. With her friend in mind, Katniss bargains with President Coin: she will be the face of the rebellion if rescuing Peeta becomes a priority.

Though most of the movie is talk and waiting, director Francis Lawrence finally dials up the suspense in the film’s climax when Katniss’ boyfriend Gale (Liam Hemsworth, given much more to do here than in the prior films) leads a mission to extract Peeta from the Citadel. But for the most part, all of the action in this film is relegated to the extras. Lawrence and the rest of the other lead characters merely while away their time, waiting for these two hours to run out so they can actually do something in the second part.

Even the ending here is uninspired. If Lawrence had decided to end this film just a few minutes earlier, Mockingjay- Part 1 would have made the next part that much more tantalizing. Instead, a corny dénouement softens the blow. It’s too bad because you spend two hours of Mockingjay- Part 1 waiting for something to finally happen, but nothing ever really does.