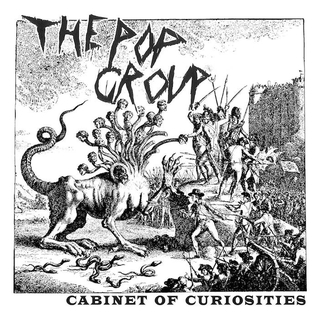 The Pop Group are one of the more interesting curios of the first wave of UK post-punk. In their first go-round, they held together long enough to release two albums and some singles that outperformed them, but today are largely remembered for just their first LP, Y. Even now, Y is an unclassifiable document of the sheer creativity birthed in the collapse of UK punk, a hodgepodge assembly of dub reggae low-end, Captain Beefheart shrieks and whoops, free-jazz skronk, and about a dozen other things that would get stopped for quarantine at customs. It’s the sort of album that alienates 99% of its listeners but reserves its greatest torture of all for those who adore it and want more, only to find so little other recorded output like it.

Three decades and one reunion later, The Pop Group have decided to help sate that freakish need with a reissue of their 1980 odds ‘n ends collection We Are Time, as well as a new compilation of yet more rarities, Cabinet of Curiosities. It’s a bold gambit at so late a date; presumably most of the band’s original fans have long since perished of overdoses, age, or simply being asleep in their homes when they were bulldozed to put up a tower block. But this is nonetheless a great occasion, and the immediacy of the tracks is undiminished from the opening stop-start riffs and barks of “Trap” from We Are Time. Not so much going from zero to 60 as existing simultaneously at both speeds, “Trap” contains everything that makes the band great: Mark Stewart’s elastic yowl, the clanging interplay of guitarists Gareth Sager and John Waddington (between the two of them, enough angles to construct a geodesic dome), and spaced-out rhythm that somehow applies spacious dub to this relentlessly propulsive punk track.

The majority of tracks from both discs are culled from live performances and BBC sessions. The former benefit from the mad energy of a strange band daring their fans to like them and encouraging the friends who tagged along unprepared to face hell or flee. Compare the live rendition of “Colour Blind” on Cabinet to the studio version on We Are Time. The spacious paranoia of the studio cut lashes out like a cornered animal, bringing out the conflict of the sparring guitars as Stewart adopts a strained sound for mid-range vocals. Conversely, “We Are Time” sounds sparer, more distinct than the Y version, which buried its sound as if recording the band down a well. The Glastonbury recording forces Stewart and even the musicians to articulate more clearly, which only makes the song even more frightening. The Peel Sessions included further that sparser, more direct sound; like pretty much every post-punk band of the period outside of the heavily produced groups like Joy Division, The Pop Group sounds its best when recorded by Peel’s engineers, the no-muss, no-fuss recordings finding a perfect blend between practiced studio chops and raw, live sound.

Given the relatively small amount of recorded output that the band left behind, it’s astounding that these two discs have omissions. Just where in the hell is “We Are All Prostitutes,” the band’s only (relative) commercial success and their most rousingly nasty single, for example? It’s also odd that we get a remix and update of their equally important cut “Amnesty Report,” but not the original article. Nonetheless, this is a fine bevy of additional material for one of the UK’s most exciting short-lived bands of the era. Few could attain the ferocity heard on the demo for “Spanish Inquisition,” which sounds less like a song about the Inquisition than a recreation of the clanking machinery and piercing screams of those being tortured by it. These reissues come after the group’s reunion, though if anything they prove that the time will never be right for them. All we can do is hope to survive a listen unscathed.