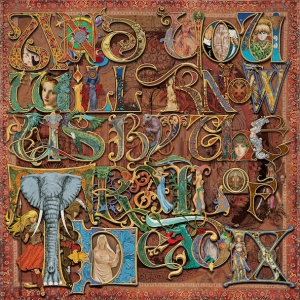 [xrr rating=3.5/5]Insistent and obsessive, …And You Will Know Us by the Trail of Dead write and perform like they’re in the grip of a sometimes terrible muse. Words burst forth as if they can’t be contained. Deep swells of ringing guitar cascade down, almost overwhelming the mix. Dynamic drops to soft moments are less a respite than a chance for the storm to gather its strength anew. Their work has a sense of urgent immediacy that demands attention. Even when the vocals are almost washed away and the lyrics are hard to follow, the songs have an emotional heft. Their latest release, IX, finds the band with less of an overriding concept than The Century of Self (2009) or Tao of the Dead (2011), but a strong tide washes through it, promising catharsis. Last year’s Lost Songs saw the band focusing on tighter, more accessible pieces along political themes, but IX falls back to their core strength of revealing personal truths, giving their material a little more rope. Maintained the stripped down lineup and tighter arrangements of their last album, the new set provides an organic extension, the band flexing dynamics just like the good old days and expanding their sonic tapestry with deftly applied strings and keyboard textures.

Trail of Dead jumps right in with “The Doomsday Book,” leading with a few seconds of sustained chords before drums propel the song forward in a headlong rush. Guitars join in earnest with a ringing arena-worthy wash, and the slurring, emotive vocals are almost buried under the drone of driving syncopation and makeshift walls of guitar. They remain clear enough for listeners to follow the theme of loneliness, of facing challenges without someone who makes it worthwhile. This kind of stirring intensity is what the band does best, and this tune dispels any doubt that Trail of Dead has lost a step.

The playlist unwinds from the veiled threat behind the martial punk rhythm of “Jaded Apostles” to the uptempo post-rock palette of “Lie Without a Liar.” These songs contain oases of quiet moments, but the band finally takes a deep breath on “The Ghost Within,” the heart of the album. Moody and thoughtful, the song is permeated with a weariness that fits the lyrics, “There’s a curse upon your home/ There’s a sadness in this room.” The vocals may be worn down, but the song builds energy as it reaches the end of the verse. On the second pass through the changes, it heats up and uses repetition to draw out tension, before it finally builds into an inevitable boil with the accusatory lines, “And I want you to let go/ And I want you to come home.” The music is a rich haze of bitterness, regret and loss, along with a sense of the love that was. By the end it all slips away, and Conrad Keely repeats those lines with the sparsest accompaniment, lost and wistful.

Trail of Dead fills IX with their usual spectrum of genre blends: Green Day pop punk, indie rock posturing inspired by the Replacements, sculpted U2-like theatricality and other, less identifiable flashes of world beat and post-rock. More importantly, the crafted production is sparked to life by their raw emotion and ability to surrender themselves to the power of those feelings. It’s not perfect – “Lie Without a Liar” could benefit by stretching out and adding a new direction or two, and “How to Avoid Huge Ships” is more a musical interlude than a fully developed song. But the band has never offered perfection. Instead, it’s the adrenaline of soaring and diving, the evocative flow that drags the listener from peak to peak and the sense of more vivid colors and experiences. Their muse still feeds their compulsion, and we’re the luckier for it.