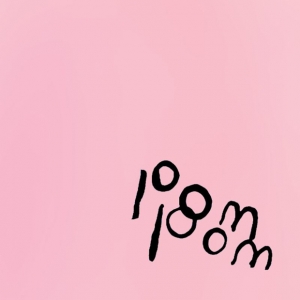 [xrr rating=4.25/5]Few other musicians define “difficult artist” quite like Ariel Pink. The man spent most of his career crafting nearly-impenetrable lo-fi pop while developing a reputation as one of the most erratic live performers in music today. Even now, he seems determined to squander any goodwill he’s earned as an artist through an ongoing collection of PR gaffes seemingly designed to make him the most unpleasant personality in indie rock. So yeah, Ariel Pink is kind of a dick as a person, and his art doesn’t really excuse his behavior. However, his art is very, very good; Pink has been making thoroughly original pop music while demonstrating a deft command of various styles and genres. His latest work, pom pom, is the purest distillation of his songwriting ethos yet. This is as Ariel Pink as Ariel Pink can get.

Pink’s earlier work with the imaginary Haunted Graffiti was something of a free-for-all, but that changed somewhat when the band became real and Pink exchanged his home recorder for a real studio on Before Today. That album and its follow-up Mature Themes presented a streamlined version of Pink, one that had focus and that didn’t rely so heavily on seemingly-disposable joke songs. pom pom tosses most of that out the window, presenting a studio-polished version of an old-school Ariel Pink record complete with bizarre detours and dark takes on radio pop. There’s no real pretense about this being a “professional” record, something that Pink had to contend with the minute he set foot into a real studio; Pink follows his unchecked muse on pom pom. If that sounds like a complete disaster of an album in the making, that’s because it normally would be. In the hands of someone like Pink, though, it makes for a compelling, thrilling listen.

One of Pink’s great strengths as a songwriter is his ability to keep a straight face through his joke songs, which makes him inscrutable on occasion. Upon closer listen, though, there’s plenty more to songs like “Jell-o” and “Nude Beach a Go-Go” (both written with former Runaways manager/novelty songwriter Kim Fowley) than just a cheap laugh. It’s not enough for Pink to come up with a silly concept; he has to construct something polished and crafted. Pink puts more into his jokes than most songwriters put into serious subjects like love and death. On “Black Ballerina,” Pink alternates between boyish nervousness and unrestrained libido over a synth rhythm that is at once sexy and foreboding—all for the sake of a skit involving a stripper and a pirate. No one but Pink would even think that this is a good idea, and no one but Pink could pull it off, quite frankly.

That’s not to say that Pink can’t be serious, though. When he wants to be affecting without being silly, he has the skill to do it. He has a knack for a sweet love song, as “Put Your Number in My Phone” makes clear. The silky, sinewy “Lipstick” gets in your ear with a smooth synth line and an eerie atmosphere that seems to pay tribute to Pink’s fondness for ‘80s goth. (That gets brought up again on the aptly-titled “Goth Bomb.”) Then, there’s “Picture Me Gone,” which could be the strongest entry in the increasingly-crowded field of musings/condemnations of the age of social media. Rather than speak down to the masses for daring to use modern technology (a trap that felled both St. Vincent and Parkay Quarts), Pink frames the position in character as a father lamenting how the digital age has devalued the memories he and his family have of each other. Sung over a swirling, funereal dirge, the song is one of the most affecting things Pink has ever written.

At times both flippant and sincere, pom pom perfectly encapsulates Pink’s wholly unique songwriting ethos. No one quite writes pop music like Pink; frankly, few artists would have the nerve to go down the weird paths that Pink seems most comfortable in. Still, nothing about pom pom comes across as a joke, musically. This is serious music from a man who may be a genius in the studio, even if he isn’t very smart around the press.