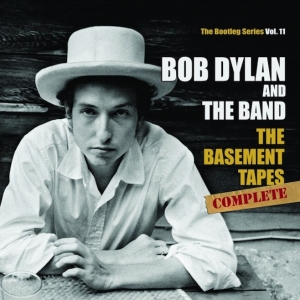 [xrr rating=4.0/5]In 1967, Bob Dylan and the Band held a series of informal recording sessions in the basement of a small pink house in upstate New York. They never intended to release the material, a combination of originals and covers of folk songs, pop songs and a few do-overs from Dylan’s own back catalog. The sessions have become the stuff of legend, the source material for some of Dylan’s best-loved songs, among them, “I Shall Be Released.” Which is ironic, because until this month, only a small fraction of the recordings was ever officially released. Selections from The Basement Tapes have been parceled out over the years, from a 14-song demo in 1967, to the officially released 1975 album that featured 16 tracks from the sessions and eight additional recordings from the Band, to a handful of tracks that surfaced on official compilations.

But that 1967 demo led to the album that’s considered the first rock bootleg, and as more and more tapes have surfaced over the years, more of the material was available if you knew where to look. Still, fans like me who have hoarded bootleg versions of this material for years were surprised when Sony announced that the next installment of Bob Dylan’s officially sanctioned Bootleg Series was to be a comprehensive release of these fabled sessions. Six hours’ worth of them, in fact, comprising 139 tracks, and by one count 30 of them have never even been bootlegged before.

Do you need to hear all of it? It depends who you are. Six hours is a lot of messing around in the basement. When you read about these 1967 sessions, you inevitably get the narrative about a young pop star, soaring on the praise and pressure that comes from being called the voice of your generation, and meeting an unfortunate comeuppance in the form of a 1966 motorcycle accident. Recovering from that real and symbolic tumble, far away from the psychedelic Pepper-pomp that everyone else in the pop world was making, Dylan and his cohorts hunkered down in Big Pink and, by varying reports, conjured up the spirit of dead folk musicians, invented alt-country and changed music history.

It may be hard to hear past the hype, but try. I did. I resisted America’s proclaimed bard for years, jaded by his overexposure, convinced that nobody could be as good or important as everybody said he was. Dylan himself didn’t seem to take much stock in The Basement Tapes, but that’s what I love about these sessions, which reveal the fertile genius of America’s boy wonder making music for nobody but himself and his friends. They didn’t think they were making important music—how could they, with throwaways like “See You Later, Allen Ginsberg”? This band of simpatico musicians was just relaxing and having fun, coming up with music and lyrics, sometimes out of nowhere. The Band’s Garth Hudson recently told Vanity Fair that “Sign on the Cross,” one of the strongest previously unreleased tracks, “seemed like he did it on the spot… It sounded like he was making up words, at one point, to fill in for one of the lines, like he was speaking in tongues. “

A lot of this material will be new to consumers who never went the bootleg route, but the never-bootlegged material includes not just alternate takes, but originals like “Edge of the Ocean,” a loose version of “Blowin’ in the Wind” and a sloppy cover of “If I Were a Carpenter.” As that kind of track list might indicate, there are clunkers here, and in places you wouldn’t expect. The version of “The Bells of Rhymney,” the Pete Seeger folk standard made famous by the Byrds, anticipates the kind of vocal misses Dylan would offer to the public on Self Portrait. You can make the case that the low points of Self Portrait are a put-on, and if Dylan’s phrasing is merely indifferent on “Rhymney,” he’s outright goofy on tracks like “Kickin’ My Dog Around.”

Still, I can’t believe Sony deigned to release the whole thing. I’ve traded for and even paid premium ducats for access to the unreleased material, throwaways and all, including the Tiny Tim sessions (really!), which are just part of what makes hardcore Dylanites point out that these aren’t truly the complete sessions. I can’t call this set an essential purchase for the Dylan dabbler on a budget. But this is a must-buy for serious fans, who will be happy with the improved sound. The two-CD sampler, with canonical Dylan like “You Ain’t Goin’ Nowhere” and “I Shall Be Released” and strange magic like “Yea! Heavy and a Bottle of Bread” and “Million Dollar Bash,” is a must for everyone else.