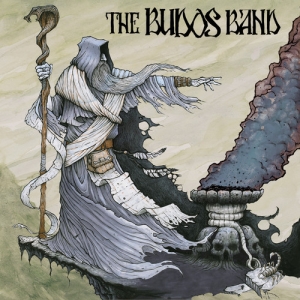 [xrr rating=3.5/5]“Badass” is my usual go to adjective for The Budos Band. They’re in the same league as the Souljazz Orchestra or Melt Yourself Down, proud providers of eclectic mixes of Motown soul, Blaxploitation film scores, spaghetti westerns and Afrojazz. But they don’t have the groovy hope of The Souljazz Orchestra, or the hallucinatory aspects of Melt Yourself Down. Instead, they funnel all their power into making the sonic version of Clint Eastwood’s man with no name. They’ve release three self-titled albums before this, and Burnt Offering is a slight departure from past work. From the album artwork to the gritty low end, it feels like the Budos Band have been jamming some old school prog and new school sludge while they went to work.

Here’s another adjective for Burnt Offering; tight. This is one well-oiled machine. There’s never a moment of wankery, the sax solos don’t outstay their welcome, and the riffs refuse to become repetitive. It’s like a well renovated ‘40s Thunderbird in all its glory. From the rising tension of “The Sticks” to the psychedelic tone that invades most of the album, it feels like Burnt Offering could have been recorded decades ago. It sounds like it was meant to be played on vinyl. It’s certainly true on the bluesy “Tomahawkturn,” a song that employs one of the year’s best uses of cowbell, and an absolutely nasty bass riff. “Trail of Tears,” in a similar fashion, plays out like the funky wake for an old jazz man, gone on into the next world. It’s hard to balance ferocity and somberness, but somehow the Budos Band pulls it off.

Brian Profilio is the drummer here and, despite the guitar and horns taking center stage, he’s the one that holds everything together. Most of these songs hold a dangerous groove. Part of that comes from bassist Daniel Foder’s grimy tone, but Profilio is a master of low simmering foundations that coat the songs in delicious sleaze. He also occasionally whips out a tremendous drum fill or two, most noticeably on the head-bopping title track. He also works the snares into a subtle frenzy on the opening of “Shattered Winds,” just before the brass comes in with a delicious main line.

If there’s a major complaint here, it’s that Burnt Offering doesn’t have enough songs that truly distinguish themselves from each other. The aforementioned sleek brass work on “Shattered Winds” is one of the few points that strikes a deep impression as a solo outing, along with the dreamy, and beautiful, guitar opening on “Magus Mountain.” Even though the Budos Band are an instrumental group, it feels like a damn shame that some femme fatale or Don Juan isn’t smoldering over some of these tracks (a more restrained yelp from Jack White would be perfect on “Aphasia”). Burnt Offering can turn into one long desert road trip, filled with dust and marijuana smoke. That’s not necessarily a bad thing though. It makes it easier to escape into high-plains drifter fantasies and other Ennio Morricone dreams.