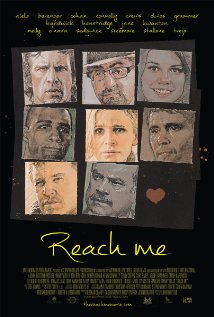 [xrr rating=1.0/5]Okay, I’ll be honest. I’m not really sure what to do with this one. Some movies are bad, but have redeeming virtues like a premise that was clearly lost in the translation to the screen, or a fine acting performance buried somewhere in a mess of a plot. Some at least struggle by with solid film foundations, like a developed sense of pace or even just an intriguing musical score. But there are also movies like Reach Me. In a way, writer/director John Herzfeld didn’t even make a bad movie. He made a fascinatingly awful one, so much so that there might not be any reason for it to exist except maybe as a weird kind of sideshow display of famous names slumming it.

Technically, Reach Me has a plot, but to describe it would risk making it appear as though the movie makes sense at any particular moment. The premise is, vaguely, that a mysterious man named Teddy (Tom Berenger) publishes a book full of self-help advice containing lines like “You can’t stop someone who will stop at nothing,” a mantra that, in this movie’s world, becomes so powerful that it causes multiple ex-cons to turn their lives around and creates a media storm. Multiple people reference the book as having gone “viral,” which means…that it’s really popular? In general, videos and memes and chain emails are referred to as viral, not hard copies of books. Anyway, the implication seems to be that Teddy is something of a Christ figure who can cure nicotine addictions and stutters by yelling at a person long enough.

But that is probably the least of Reach Me’s problems. The film follows various individuals, all vaguely related to each other by Teddy’s book, as they move around Southern California. Herzfeld seems to be aspiring for something like the interlocking unities of Crash), but honestly, the ridiculousness of each scenario and the tone-deaf messages of the film make a piece of proselytizing drivel like Crash look as well made as Magnolia). Here are a couple key elements of Reach Me:
• Sylvester Stallone spends most of his role yelling aphorisms like “IF YOU’RE NOT RUTHLESS, YOU’RE TOOTHLESS.”
• Kelsey Grammer portrays a Mafia boss named “Angelo AldoBrandini.” He yells at Tom Sizemore on a golf course.
• Thomas Jane is (bafflingly) dressed like a cowboy. He is also an undercover cop who shoots Danny Trejo in a bank robbery, and then Danny Aiello yells at him for using his gun in the line of duty.

There’s a lot of yelling happening. But if Reach Me were just a bad movie with a weirdly notable cast (which also includes Kyra Sedgwick, Nelly, Cary Elwes, Terry Crews…even Frank Stallone), that would be one thing. But it is also a weirdly offensive movie; one character is sexually assaulted on a movie set and there is a persistent tone of racism. At first, some rather oafish characters feel the need to punctuate themselves with racial epithets, but by the time Jane’s character (who, remember, is dressed like a cowboy) guns down a crew of Latino stereotypes to prevent the gang rape of two white women, the racism is translated from subtext to text.

Reach Me is destined for the “so bad it’s good” circuit of movies, where it will take second tier to the likes of Tommy Wiseau’s The Room or Sharknado, but I’m not sure it really even deserves that. It is so terrible on so many levels (I haven’t even mentioned the black and white flashbacks that are spotted with red blood in some horribly misguided Schindler’s List homage) that it really beggars belief that it even exists. But exist it does, for whatever reason.