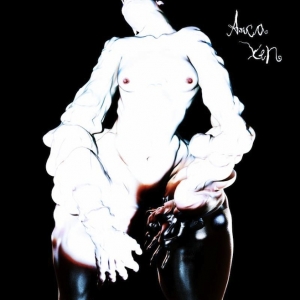 [xrr rating=4.25/5]As the status, and bank accounts, of superstar DJs (the likes of Calvin Harris, David Guetta, Diplo, Skrillex Zedd) have come to overtake many of their rock star contemporaries, the general idea and expectations of an electronic producer have morphed. Since finding his way aboard the legendary team behind Yeezus, the Venezuelan-born Alejandro Ghersi (currently working as Arca) has found himself among this upper-echelon of club-turned-pop collaborators. However, while those main stage entertainers are busy assisting marketing-driven projects toward their next genre-du-jour single, Ghersi has remained truthful to his poetic experimental hip-hop. For the UK-transplant, he also spent some time in New York developing his signature industrial-lean, the 15-track Xen is more than a confident debut, it’s the public reveal of a personality that the openly homosexual beatsmith had previously reserved for only his closest friends. These friends and partners, like designer/roommate Jesse Kanda and Hood by Air creator Shayne Oliver, providing the positive reinforcement (and industry contacts) for Ghersi to explore this sassy, gender-neutral alter-ego that surfaced during the less-lucid moments of Ghersi’s existence.

Self-awareness has been key to Ghersi’s rapid success, and anchors an album that ranges from delicate piano arrangements to violent breakcore. As Ghersi reveled leading to the album’s release, most of the concept was the result of improvised recording sessions in the confinement of his bedroom studio; intermittently breaking his seclusion to bring his minor aural epiphanies upstairs for Kanda to critique. Even without some reactionary framework to reference, these (possibly chemically-altered) sessions coalesced into a true story — a rare element in the 2014 electronic LP. The onset of Xen is lush with dark, cinematic electronica. The type of long-swept melodies one could envision West taking the stage while dressed in his metallic mask. Ghersi’s background in classical piano, and advanced knowledge in orchestral songwriting, is displayed during the soul-piercing (dis)enchantment of “Held Apart” and the combative motifs that pull the title track toward the mediaeval cathedrals of Europe and the control room of Starship Enterprise. Ghersi, who is relatively absent from both all social media, didn’t need a well-funded team to promote his history as a classical musicians, the training fuses all of the dizzying feats together.

Without the utterance of a single intelligible syllable, Ghersi guides this turbulent tale of acceptance. A personal journey that dates back to the internal debate of coming out over a half-decade ago and the more recent realization that happiness isn’t found in the status-quo. Despite the success, Ghersi continues to explore his personal and artistic limitations. This, some might judge as unnerving, quest intensifies during the latter third of the album. The static beneath “Fish” commences timidly enough, eventually shifting into a defiant beast barely tethered to the earlier palette.

That sense of control is dissolved during conclusory tracks “Tongue” and “Promise”. These are not B-side add-ons, they close this chapter of Ghersi’s artistic cycle. Just as Bjork describes that vividly in “Hyberballad”, sometimes you just have to throw yourself off a cliff toward the jagged rocks below. Well…. creatively we mean. Xen is experimental, but beneficially it isn’t without its transitory references: the atmospheric bass of Amon Tobin can be heard amid the background album opener “Now You Know” and aforementioned “Xen”, fellow Yeezus co-producer Gaseffelstein’s proficiency for anxiety-building silence adds depth to these experiments and Aphex Twin had the electronic realms re-visiting drill-and-bass before his launched SYRO.

Benefitting from the West connection, Ghersi is well assisted on this risky artistic path. While Ghersi might not get the respect he deserves as 2014’s “Rookie of The Year”, he is attached to the acclaimed FKS Twigs debut and will be busy during 2015 co-producing Bjork’s forthcoming ninth LP. Along with Zhu and Cashmere Cat, Ghersi are the progressives of hip-hop instrumentals. Prime for the future, it was a transparent emotive depiction of his past, and the complex artist it created, that will keep Xen so alluring as the Arca moniker continues to be discovered from these collaborations.