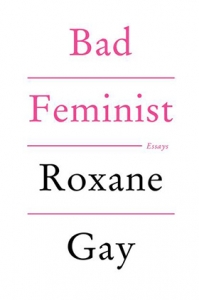 [xrr rating=3.75/5]As 2014 limps out on its last legs of Black Friday sales and mandatory company holiday parties, it’s a perfect moment to reflect on how feminism has influenced this year’s culture and conversation. There was Beyonce’s VMA proclamation, Hermione’s UN speech, Benedict Cumberbatch’s t-shirt. Aside from the pop fluff, this will also go down as the year of the woefully unsuccessful #BringBackOurGirls hacktivism campaign, the godawful Gamergate debacle, and Hobby Lobby—not exactly glimmering beacons of equality and progress. For every sign that feminism is becoming mainstream (Lena Dunham!), there’s another indication that the movement is so over (the maligned TIME Magazine poll suggesting the term should be banned from the English language).

But what, exactly, are we fighting for? What is feminism, and what makes someone a feminist? These shouldn’t be difficult questions, but as Roxane Gay points out in her Bad Feminist introduction, the answer will change and contradict itself depending on who (and where, and when) you ask. Even we, self-proclaimed feminists as Gay and myself are, disagree on what we stand for and who we are and, what seems to dominate the conversation, who we aren’t. Bad Feminist is a collection of essays exploring the contradictions in the feminist identity, creating a holistic, sympathetic compilation of a woman’s heart versus the manifesto of an idealist.

Gay believes in the right to choose, the right to equal pay, the right to representation, the right to a positive body image. But she live-blogged her first read-through of the Vogue September issue. Reads the new Sweet Valley High reboot books. In a perfect encapsulation of her paradoxes, she describes her love-hate relationship with Robin Thicke’s “Blurred Lines” (you know, when Thicke was still more Adam Levine and less Scott Stapp). Yes, the lyrics are definitely kind of rapey and the music video is gross. But goddammit, how can you not dance to it?!

The essays in Bad Feminist, most with a pop culture lilt, show a woman who’s decided to dance to what makes her happy instead of being an ideologue. She uses relevant launching pads like a review of Mean Girls or Django Unchained, the subculture of the championship Scrabble circuit, or the abomination that is The Help, as a route into complicated discussions on sexism, the male gaze, racism and privilege. By tempering her cultural criticisms with personal experience and examination (she’s never afraid to call herself out on being hypocritical, inconsistent or straight-up wrong), she largely avoids being preachy or prescriptive. Her analyses do not come with answers, but rather a call for any and all of us to ask harder questions. Look closer into our judgments and values. Be unafraid if we discover that we’re not always right. In this way, Gay may not be insisting on a feminist revolution, but a revolution of our own hearts. If we’re not afraid of being “bad,” what’s to stop us from moving on to getting something right?