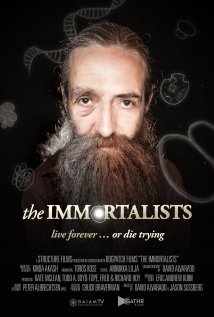 [xrr rating=3.5/5]Human flight was considered impossible until it wasn’t. Such logic is the driving force behind the efforts of two eccentric scientists in the new documentary The Immortalists. The men are convinced that the medical field is on the brink of discovering a cure for aging and will then triumph over death from natural causes. Though generally met with skepticism and even derision from many colleagues, these men of science persevere largely because of personal investments in what a reversal of aging could mean. American scientist Bill Andrews has an 84-year-old, dementia-stricken father, and British theoretical biologist Aubrey de Grey not only has an 81-year old mother, but a scientist wife who is 19 years his senior. The Immortalists, then, is not so much a thorough examination of immortality research as it is a fascinating insight into what drives two men to challenge what we consider possible.

Despite their mutual goals, Andrews and de Grey have little in common. Andrews is a man who, despite many relationships, has always been skittish about getting married. As he nears 60, we now find him engaged to a woman who accompanies him on ridiculously high-altitude Himalayan ultra marathons. His fiancée also shares that she stands behind Andrews’ research so strongly because, if he’s successful, their impending marriage could virtually last forever. On the other side of the coin, de Grey vocalizes that immortality would naturally call into question whether monogamy would remain practical. His romantic life is emblematic of this, as the 49-year-old relays that he has a wife who is 68, a girlfriend who is 45 and another girlfriend who is 24. His polyamory is begrudgingly accepted by his aging wife, who nervously asserts the two of them are still in love while clarifying that being part of a harem isn’t her “scene.”

Both of the featured scientists make fairly outlandish claims. Andrews predicts that within 10-15 years doctors will be routinely prescribing age-reversing pills. De Grey insists that we don’t need to be concerned about the overpopulation that would likely occur with drastically increased life spans because we have no idea what birth rates may be like 100 years from now. Though early on there’s some compelling theory, and even a little evidence, about how certain enzymes could potentially repair cells that naturally break down during aging, the film quickly turns its focus to the eccentricities of its two principal players. De Grey sports a flowing ZZ Top beard, guzzles beer at every turn and enjoys having sex outdoors. His nearly-70, dentally-challenged wife is frequently trotted out as evidence of his unconventional lifestyle. Meanwhile, Andrews is obsessed with running ultra races that would be taxing for a man half his age, despite the frequent hospitalizations and heart issues that these races cause.

There’s something both admirable and foolhardy about these two scientists’ fixation on curing aging and death. The greatest scientific and technological breakthroughs often began as seemingly crazy ideas. Futurists do predict that organ and tissue repairing nanobots could play a crucial role in extending life spans in the not-too-distant future, so the idea that such an end could be achieved more organically isn’t necessarily that far-fetched. However, with the shift in focus to the side show of the two scientists’ strange personal lives, The Immortalists seemingly loses interest in the merits of these theories. Topics like overpopulation, the impact on natural resources and other ethical questions are barely touched upon. But it’s above the purview of a single documentary to answer all these hypotheticals. Instead, The Immortalists offers a compelling glimpse into the lives of two strange men who, as the film’s tagline suggests, plan to cure aging or die trying.