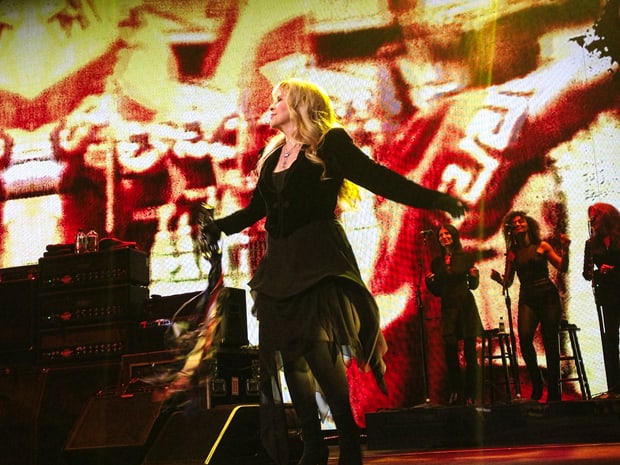 A fear exists when seeing older acts, especially those such as Fleetwood Mac who haven’t put out a critically acclaimed album since the late ‘70s, that they are merely going through the motions, churning out watered-down versions of hit songs many decades old. The Police did just that on their reunion tour, bilking audiences out of millions of dollars while playing soft-cock versions of formerly spiky hits such as “Roxanne” and “So Lonely.” Joined by Christine McVie for the first time in 16 years, Fleetwood Mac turned in a nearly 25- song performance at Portland’s Moda Center that felt vibrant, exciting and alive.

The band kicked off the show with “The Chain,” an auspicious choice as it’s the only song from Rumours (1975) credited to all five members who currently graced the stage. Right from Lindsey Buckingham’s twangy opening licks, the audience erupted into cheers and the band matched them right back with an intensity that flagged little over the next few hours and 24 songs.

But while Buckingham’s guitar heroics, Stevie Nicks’ witchy stage presence and Mick Fleetwood’s raucous drumming are all key elements to a Fleetwood Mac show, this tour is clearly centered on McVie’s return. The singer/keyboardist was immediately given her first moment in the limelight as she took lead vocals on “You Make Loving Fun” and Nicks even took time away from the music to express her excitement at McVie’s return.

For a band with such a fractious history, the five members of Fleetwood Mac seemed to be enjoying themselves. Buckingham prowled the lip of the stage, sweat dripping, as he crunched out signature licks from songs such as “Rhiannon” and taking lead vocals on classics such as “Second Hand News.” Nicks, always evoking the gypsy spirit, wore all sorts of flowing accoutrements and still sounded strong of voice. Even Fleetwood’s drum solo during “World Turning” wasn’t too cheesy. Holding it all together was John McVie’s stoic bass. 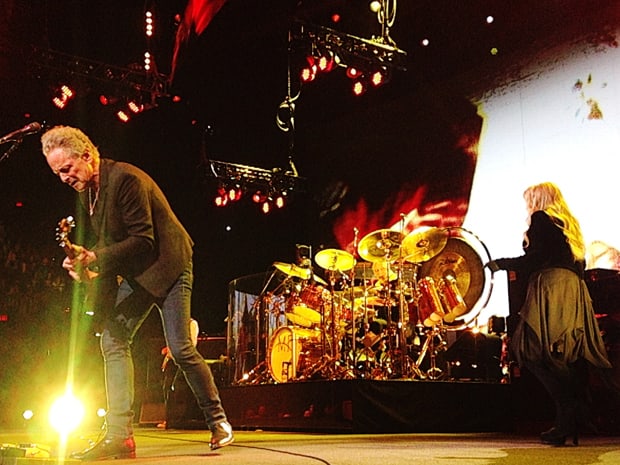 Even though Fleetwood Mac came through town last year, now is the time to catch the band with Christine McVie in tow. Sure, the set list leaned heavy on Rumours material and greatest hits, but chestnuts such as “I Know I’m Not Wrong” managed to worm their way into the show. However, a casual fan would likely find themselves familiar with a good deal of the songs that were played that evening.

The quiet moments rivaled the bigger ones, however. At one point, Nicks and Buckingham shared the stage and did emotional renditions of “Big Love” and “Landslide.” And Nicks also had a chance to speak to her fans, explaining how she joined the band and urging us to follow our dreams. It could have been a maudlin story, one she likely tells each night of the tour, but it felt genuine.

Just like the explosive finale at any fireworks show, Fleetwood Mac saved some of its biggest hits for the end. The band finished the first set with the one-two-three punch of “Gold Dust Woman,” “I’m So Afraid” and “Go Your Own Way.” But the night was Christine McVie’s and she finished it out with “Songbird” as Buckingham accompanied her on the piano, a graceful way to end a show from a band aging gracefully.