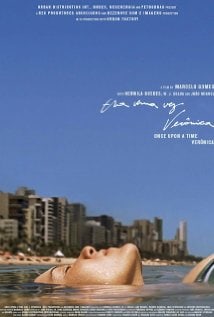 [xrr rating=1.5/5]Does finding a scene of Veronica’s father organizing his record collection more interesting than any of this film’s copious sex scenes make me some kind of weirdo? Not when you take into account the self-absorption of its protagonist (Hermilia Guedes), a thirty-something whose life after medical school is marked by teenage-diary type inner monologues like, “Patient: Veronica. Had some great sex last night. Or at least she thinks she did.”

Director Marcelo Gomes’ film follows its titular character as she starts working as a psychiatrist, but she soon turns her apparently unfinished analytical skills on herself, much in the way that the director’s shallow analytical skills fail to develop his characters. This look at the life of a young woman trying to make a career for herself is sprinkled with so much sex that it’s as if an American International Pictures sexploitation script was airlifted down on a Brazilian arthouse director. Once Upon a Time Veronica is a throwback to days when arthouse movies meant a lot of sex, and like many of the arthouse titles that drew high school kids to cable stations looking not for great cinema but full frontal nudity, it’s neither entertaining as sexploitation nor successful as art.

Gomes’ filmmaking style is modestly unassuming, but his script is full of cringeworthy clunkers like, “I, patient Veronica. Uncertain about life, like everybody else.” A nightclub singer provides some musical commentary as blatant as any in American soundtracks: “It’s all standardized in our hearts/ Our way of loving doesn’t seem to be ours at all/ Forever moving love to a new address.”

I held out hope that Brazilian pop music might save the film, but it doesn’t. Still, the most interesting thing here may be the glimpses of her ailing father’s record collection. Veronica’s relationship with her father is her strongest and perhaps only real relationship in the movie, but even this is both underdeveloped and obvious. When she walks with her father past a building that he tells her used to be an arthouse cinema, you half expect him to add, “You see this tattered palace? This is where I used to see boring movies full of sex, not unlike the one we’re starring in right now, my child.”