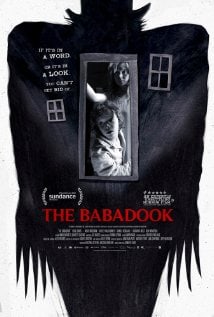 [xrr rating=2.75/5]Some of the best horror films rely more on mood than the payoff. The Babadook, the debut feature from Australian writer/director Jennifer Kent, has all the right elements in place for an effective horror film, but ultimately stumbles when they fail to congeal. But until it collapses at the end, the movie does offer up some creepy thrills, making it an interesting first film and worth a look, especially for fans of the genre.

Essentially the breaking point of a fraught relationship between a mother and her young son, The Babadook is horror that springs from sleepless nights, unresolved grief and sexual repression dressed up in a haunted house story. Amelia (Essie Davis) is still reeling from the loss of her husband who died years earlier in an accident as he drove her to the hospital to deliver their son. Flash forward and that son has grown into Samuel (Noah Wiseman), a creepy six-year-old with behavioral problems who is convinced that a monster is living in his room. Amelia is at her wit’s end. Samuel is constantly in trouble in school and taxes her time and patience. She hasn’t gotten laid in years. The cracks are beginning to show. It is obvious Amelia blames Samuel for her husband’s death.

Then a creepy pop-up book, called The Babadook, appears in the house, scaring the bejesus out of Samuel. Filled with terrifying images of a top hat-wearing monstrosity, the unfinished book promises that something wicked this way comes in the form of a monster. But before we actually see the Babadook, Kent fills the film with the requisite bumps and chills we expect from haunted house movies. Lights flicker. Creepy sounds filter in from sources unseen. You know that cute little dog is going to die, as pets are wont to do in horror films.

But is the Babadook the real horror here? Amelia has been living a stunted life since her husband passed away and her house is a place of no cheer. Is Samuel truly disturbed or is he just a manifestation of his mother’s stunted emotions? As Amelia spirals into sleep-deprivation, she turns violent. It is unclear if she has been possessed by an evil specter or if she has finally begun to crack.

And therein lays the problem. The set-up is there for a creeptacular horror film, but the tiny elements don’t lead to a satisfying whole. The idea of the Babadook itself is frightening, but the actual execution doesn’t really work, especially as Kent grabs from sources such as Repulsion, The Exorcist and Rosemary’s Baby. Davis is fantastic as a woman slowly losing her grip on her sanity and Wiseman is creepy, but the performances aren’t enough to carry the film. The book says that once you invite the Babadook in, you can’t rid of it. It seems the Babadook had been there all along and once it moves from actual specter to symbol, Kent’s film loses its way. Depression can be scary. We don’t need a made-up monster to stand-in for despair. That thudding sound you hear isn’t a creature knocking on the door to get in. It is Kent’s heavy-handed attempt to make an intellectual horror film and somehow dumbing down her movie in the process.

May not bring anything new to the table, but it is an effective entry into the canon of si…