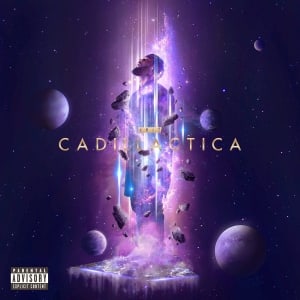 [xrr rating=4.0/5]Mississippi rapper/producer Big K.R.I.T. has been impressively prolific since his breakthrough mixtape in 2010, K.R.I.T. Wuz Here, but he has also struggled to find a cohesive musical personality. The deep bass, soulful groove and twangy vocals of southern rap permeate his many releases, but there’s more to the rapper’s method than that conventional sound, an intimacy and sincerity that K.R.I.T. sometimes appears to downplay. Cadillactica is only the rapper’s second studio album, but it’s a big step forward in defining who he is as an artist. The southern rap framework is still in play, perhaps more than ever, but K.R.I.T. has finally let his intensity and honest spirit play as big a role as the familiar tropes he has always employed.

Cadillactica balances Big K.R.I.T.’s many talents on a more focused foundation than on his previous releases. The lyrical content of this cosmic-themed album sits somewhere between Kendrick Lamar’s intricate inner-city storytelling and the spaced-out vibes of ATLiens and Aquemini era Outkast, but K.R.I.T.’s unique style reaches a critical point on Cadillactica. Whether the rapper is lamenting the loss of innocence (“Soul Food”), blaming the lack of social consciousness in modern rap music on a generation that doesn’t care (“Lost Generation”) or bragging about something as frivolous as his car speaker system (“My Sub Pt. 3 (Big Bang)”), he does it with both gravity and heart. That passion makes up for the fact that K.R.I.T. isn’t really saying anything new.

Cadillactica’s production values may be its greatest asset, elevating K.R.I.T.’s sometimes monotonous vocal delivery to pitch perfection. The album’s distinctive sound can be attributed to a rich, soulful vibe built from melodic hooks, smooth soul samples and instrumentation drowned in spacey reverb effects. The album’s title track is a highlight not only for K.R.I.T.’s brash staccato rapping, but also for its beautiful, open production, filled out by a few quiet synthesizers, lush bass guitar and ethereal background vocals in the hook. On “Lost Generation”, K.R.I.T. says, “I’m saying what I gotta/ ‘cause the club songs ain’t saving my partner.” With tracks like “Cadillactica,” K.R.I.T. distances himself from today’s typically one-note dance music, investing in his skills as a storyteller and capable lyricist, creating sparse, contemplative and emotional music that counteracts the superficial.

Songs like “My Sub Pt. 3 (Big Bang)” or “King of the South” may play into conventional hip-hop stereotypes of material fetishization and braggadocio, but K.R.I.T. always hits deeper than it seems. A song about subwoofers provides a metaphor about the powerful effect music had on the rapper, and a song about holding the crown in the South might actually be about why other southern rappers shy away from “the soul and the pain and the blues” of the region which K.R.I.T. loves so much. With Cadillactica, Big K.R.I.T. aims for universal appeal not by pandering or compromising his distinctive sound, but by being honest, thoughtful and lyrical. As indebted as he is to his influences, K.R.I.T. has finally found a niche that he can slip into perfectly, and his dedication and individualism has finally caught up with his talent.