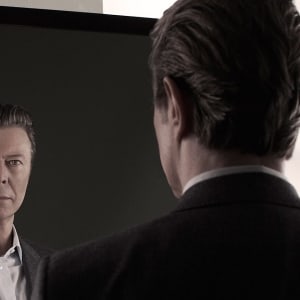 [xrr rating=3.5/5]From its Photoshopped cover art to its references to Berlin, David Bowie’s 2013 album The Next Day found the usually forward-thinking artist taking a moment to reflect on his past and his legacy. This uncharacteristic reflection continues with the career retrospective Nothing Has Changed. The compilation offers no real surprises, but it may be one of Bowie’s most controversial releases, as it forces the listener to revisit the singer’s career in reverse chronology.

Things kick off with “Sue (Or in a Season of Crime),” the lone new song in the collection and the main reason Bowie completists might seek it out. Bowie does his best Scott Walker impression over a Maria Schneider jazz arrangement that would also be fitting for Mr. Walker. It’s not bad, but it’s a shame to see Bowie aping someone so openly, especially since it’s followed by Bowie aping himself on “Where Are We Now” and “The Stars (Are Out Tonight).”

After that, we get what is arguably the only part of the collection worth reconsidering. Bowie’s work in the ‘90s and early ‘00s doesn’t get much respect, and it seems as if Bowie himself is taking a longer second look at this point in his career. Five of the singles on the first disc of Nothing Has Changed are remixes, which provide not only a reminder that Bowie was one of the first mainstream stars to embrace remixes, but also a different lens on this much-maligned period of his career. The singles chosen are among the strongest of this era: for all the flak Bowie got at the time for his embrace of industrial music, “I’m Afraid of Americans” still kills, and Bowie sounds right at home on the Pet Shop Boys’ remix of “Hallo Spaceboy.” If anything, Nothing Has Changed serves as a reminder that Bowie’s lost years may be worth discovering again.

The’80s started great and ended poorly for Bowie and Nothing Has Changed doesn’t do anything to counter that. Predictably, the collection focuses mostly on the twin triumphs of Let’s Dance and Scary Monsters (And Super Creeps). Most of Bowie’s mistakes from the decade are excised here (the lone exception being his cover of “Dancing In The Street” with Mick Jagger, which can’t ever be enjoyed without the video clip accompanying it). Once “Modern Love” kicks off, though, there isn’t a bad song on the rest of the collection. From the ethereal art-rock of “Heroes” to the glam strut of “The Jean Genie,” Nothing Has Changed delivers classic after classic towards the end of its run time.

Fans may gripe about the track selection. Bowie classics like “Queen Bitch” and “Suffragette City” don’t make the cut, and Bowie’s trio of late-‘70s masterpieces Low, Heroes and Lodger are only represented by one song each. But as a general overview of his career, Nothing Has Changed subverts expectations, succeeding as a tasteful, concise portrait of his legacy. Perhaps that explains why Bowie seems so interested in his past now: he’s telling his story on his own terms.