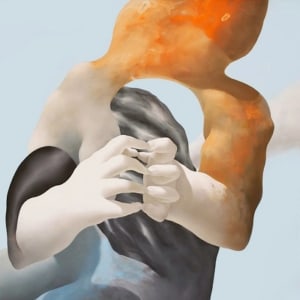 [xrr rating=1.75/5]A reviewer friend of mine often derisively refers to modern R&B that’s highly acclaimed as “PR&B,” the “P” standing for Pitchfork. He has a cynical view on the recent rise of artists like How to Dress Well, FKA twigs and James Blake, the type of artists that tinge their silky vocals with ambient electronic textures. There’s plenty to enjoy with this so-called “PR&B,” but Songs may be the album that has made me wane to the more jaded side with this genre.

Deptford Goth, a.k.a. Daniel Woolhouse, actually had a fine album last year with Life After Defo. It floated in a lovely haze thanks to his natural flair for composition. Album highlight “Feel Real” summed up Woolhouse’s finest musical traits in one neat package, thanks to a brilliant live version that found him working alongside a choir that sang his arrangements. It made the song sound full and expansive. Most of Songs feels so small in comparison. It’s an album tangled up in meekness.

“A Circle”—the song that attempts to be the album’s core—shows off Songs’ main flaws. The opening of Woolhouse over a lonely piano holds a weak vocal performance from someone who can often balance strength with tenderness. As a chorus of Woolhouses descends onto the song, the rhythm feels off, detached from the wavering synth in the background. Even when a horn part that should have been a bright burst of light comes in, it feels synthetic and cold, like it was played on a keyboard preset.

“Two Hearts” suffers worse than “A Circle.” It’s sappy enough to put a diabetic into shock thanks to predictable piano chords and Woolhouse’s pouty delivery. On top of that, the artist decided to coat the chorus with an out-of-tune choir shouting, “We! Are! Real!” It’s a confounding choice for a musician that usually prides himself on pristine song structure. “Code” holds similar problems. It’s fluff as well with Woolhouse cooing “Hold me/ I’m a ghost” over shimmering keyboards that seem painted onto the skeletal background. Production choices like the ones on “Two Hearts” and “Code” bog the album down. Woolhouse is perfectly capable of making a compelling foundation for his voice, but Songs holds only starkness. It’s as though his voice is crying out for something to support it, but finds only emptiness. Because of that weakness, every song fails to captivate or engage, even on the most basic level. Songs is apparently based around Woolhouse’s marriage, but the way the lyrics drift by, it could be about anything, or, more likely, nothing.

Most of the album just falls into general inoffensiveness—nothing outright bad, but rather wholly forgettable. Only “True Hearts” stands as simply bad. None of these songs holds a tangible foundation. Each track floats around aimlessly and carelessly, and it seems impossible to hum any of the major melodies, even if a song just finished playing.