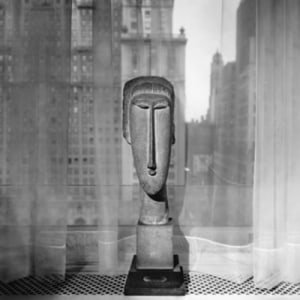 [xrr rating=3.75/5]“Techno” has seemed an inadequate description for Andy Stott’s ever-changing sound for the better part of a decade now, but with Faith in Strangers it ceases to have any meaning whatsoever. A beat does not even coalesce on the album until a third of a way into its second track, nearly 10 minutes into the LP proper. By the time it drops in, we’ve already waded through the foghorn bleats and pulsing siren calls of “Time Away,” as well the percolating buzz of a spaced-out synth line and ghost-in-the-machine vocals in the first portion of “Violence.” In effect, the first tether the record casts back to Stott’s generic roots is the first major disruption of the album, the expected now wholly unexpected.

The album frequently contrasts such disruptions with its oneiric wash, often within the same song. “On Oath” builds atmosphere from a wall of hiss and staccato dream-pop vocals before stuttering percussion and scraping metal spikes shake up the composition, all as cavernous bass undercuts any easy listening with a sense of dread. Though it traverses its own, jagged territory, the track consolidates its two predecessors, a single suite journey from ambient to techno and back again. “Science and Industry” rides an elastic low-end through several stop-start moments that kill any danceable momentum, while “How It Was” soundtracks the waking of a colossus, a disruption of calm that leads to the sound of lumbering wubs. It’s impossible to pin anything down; it’s too propulsive to be dark ambient, but too prone to implosion and diversion to work as a dance floor banger.

The only constant on the album is its sense of foreboding. Gently percolating synths unfurl in a locked pattern at the top of “No Surrender,” yet the crescendoing, increasingly distorted arpeggio becomes as sinister in its own way as the compressed bass lines that come crashing in after about two minutes. “Faith in Strangers” embodies the anxiety in its titular concept, struggling to trust the viewer enough to share itself, while closer “Missing” likewise lives up to its name with hollow low-end, moaning strings against an airless background. “Damage” is scariest of all: metallic scrapes tug flesh over spikes, exposing nerve strands that are then plucked simply to listen to their agonized twang.

Frequently slipping back into hazy static and ethereal, half-understood vocals, Faith in Strangers often lulls the listener, but the constant intrusion of beats from the murk turns the album into bass’s answer to the Surprise Symphony. Hardly anyone makes capital-A albums anymore, least of all reps from the electronic scene, who largely abandoned trying to make full-length, cohesive dance records long before everyone else went back to singles. But Stott manages not only to produce a great LP that works as such, he does so with tracks that are individually striking enough to exist on their own, to the point that Faith in Strangers sometimes comes off as a compilation of a run of killer 12-inches. Stott has been on a roll since 2011, and with his latest, he shows no signs of slowing down as one of the most exciting producers in contemporary electronic music.