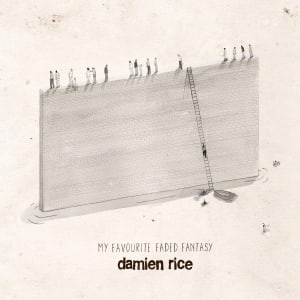 [xrr rating=4.25/5]Guilt, empathy, greed, jealously, lust, there are innumerable reasons we avoid telling the truth. As a society, we are even encouraged to hide behind white lies to avoid damaging delicate relationships. But at what point do these little un-truths accumulate to something greater and we start falling for our own bullshit? As the number of outlets for anonymous criticism has exploded during the 21st Century, candor has become quite the rare commodity. As with all precious goods, the brilliance of candid artistry is still rewarded handsomely. Following an extended recording hiatus triggered by the separation from former lover and collaborator Lisa Hannigan, Ireland’s Damien Rice has recovered enough to once again expose every nerve in his being to all those willing to lend an ear. Not even Rice, who had been absent from the studio for eight years, could embark on this endeavor alone. The singer-songwriter enlisted the support of superstar producer Rick Rubin to help him go deeper into his own tortured psyche.

Without the dynamic of Hannigan’s vocals, even more emphasis is placed on the quivering timber of Rice. When reminiscing about yesteryear’s favorites like “9 Crimes” and “The Blower’s Daughter” it is the instrumental emptiness that pulls so immediately at one’s heartstrings. Primarily, only an acoustic guitar, subtle ivory plucks and a wandering violin created the foundation for the pair’s vocal interplay. This instrumentation has been expanded considerably during the first third of the album’s eight tracks. The echoes of distant electronics and a slowly rolling percussive pattern embody the lyrical frustrations of the title track — what started out as a daydream quickly morphed into an explosive nightmare. The expanded orchestral tones behind “It Takes a Lot to Know a Man” calms that angst. This introductory turmoil arrives from a man still amid the healing process. Rice is not only forgiving Hannigan for whatever ills might have led to their split; he is also coming to terms with his own romantic ineptitudes.

Despite these interpersonal hurdles, Rice continues to be incomplete without a passionate “other.” “And all these useless dreams of living alone/ Like a dogless bone…/ So come let me love you/ And then…colour me in” Rice bemoans during “Colour Me In”. Just as Rice needed the presence of Rubin in the studio, he still requires the unconditional love and support of another to be whole. About to celebrate his 41st birthday, Rice is comfortable with these insecurities. And as preached during “I Don’t Want to Change You”, he has accepted the intrinsic faults that will exist in all those he could surround himself. Loneliness is a far worse sentence than the pain that comes through honest misgivings.

By penultimate track ‘Trusty and True”, much of the instrumental anguish of the earlier tracks has been eliminated. A tale of personal growth, the eight minute track is a celebration of his newfound strengths: “And we can’t take back/What is done, what is past/So fellas, lay down your fears/So let us start from here…”

Akin to Cat Stevens, James Taylor, Jackson Browne, the late Elliott Smith and Mark Linkous, plus contemporaries like Adam Granduciel (War on Drugs) Rice has the uncanny ability to reach through the speaker cone and coax a few tears from even the driest eyes. For reference, stay away from “The Greatest Bastard” if attempting to avoid the water works. This sadness should not be dismissed entirely.