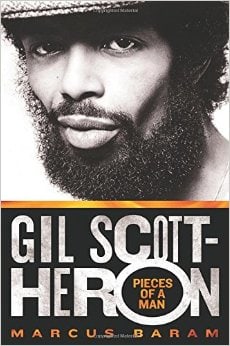 Author Marcus Baram could not have chosen a better epitaph for the title of his new biography, Gil Scott-Heron: Pieces of a Man. Of course, given Scott-Heron’s legendary skill at forming a pointed phrase, he had a lot of options to choose from. But the singer and poet was a singularly troubled, striking figure in popular culture: he was a musician who didn’t think much of his skills; a writer who gained his greatest fame and popularity in another field; a distinctly limited vocalist with an immense lyrical talent; a proponent of Black Pride who eventually succumbed to some of the worst stereotypes he decried; and a social activist who spent much of his life deliberately pushing society away from himself.

Pieces of a Man is a wide-ranging look into Scott-Heron, seemingly attempting a definitive look at the singer’s life. Beginning before he was born, Baram sketches out the life of his father, a Jamaican football star, and his tumultuous relationship with his mother in as much detail as can be garnered decades later. He follows his birth in Chicago and relocation to Jackson, Tennessee, which are posited, along with the 1960s era Bronx, as the seminal locations of his life. For the most part, the author reveals his subject’s life through the lens of friends and bandmates, and as time goes by, critical reviews of his albums and career. By the time Scott-Heron achieved ongoing cultural fame with his still-potent “The Revolution Will Not Be Televised,” it began to be difficult to differentiate the person from his agitprop persona.

Because of that, Pieces of a Man functions in large part as a critical review of Scott-Heron’s work. His work with Brian Jackson (from 1971’s Pieces of a Man to 1980’s 1980) is fittingly lavished with the most attention, serving as it does as the singer’s most notable work. Whole pages are devoted to dissection of his proto-disco hit “The Bottle” or his anti-Apartheid “Johannesburg,” while his powerful stage performances are glowingly reconstructed through the recollections of onlookers. But Baram runs into two impediments that effect the entire book. The first is his own Scott-Heron fan worship. The second is Scott-Heron’s deep inability to create lasting bonds.

The latter is an issue, because though the author was acquainted with Scott-Heron (who died in 2011) it seems that no one truly knew him that well. Again and again, Baram describes how the singer would build walls between himself and his friends, family, fans and bandmates, pushing away anyone who disagreed with him musically or criticized his increasing drug habits. After a certain point, even interviews with the man himself become more reflections on an ingrained persona and said little about his feelings or life. That Baram finds it difficult to criticize one of his musical heroes becomes more problematic; at times, Pieces of a Man pushes into hagiographic territory. Scott-Heron’s womanizing and neglect of his many children is either lightly skimmed over or excused as part of a social attitude. And while his decades-long history of drug abuse is delved into extensively in the later chapters, it is treated gingerly at best. His addiction to crack cocaine is almost always viewed either as a symptom of his exhaustion as a touring musician and a countercultural figure or of his issues as both a father and a son. It might have been more honest to directly relate it to years of regularly smoking crack.

Pieces of a Man was exhaustively researched by Baram over the course a year and compiled from dozens of interviews, which highlights the author’s background as a journalist with The Huffington Post and the New York Daily News more than anything else. Even if it glosses its subject’s flaws a little too easily, it is a comprehensive and fascinating look at a figure who could all too easily been lost to the darkness of his later years.