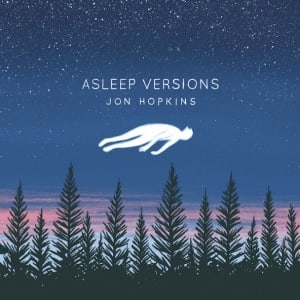 [xrr rating=3.0/5]For electronic minimalist Jon Hopkins, the term “cinematic” seems belittling. His ambient techno is visceral and compelling enough to exist without any visuals. Without uttering a single syllable, Hopkins tells stories, and his 2013 LP Immunity was one of the most under-appreciated albums of the year. Its eight tracks seemingly pour from Hopkins’ soul, encapsulating our current dependency on technology as a means to validate our own human existence. Aptly titled, “Breathe The Air” strikes us to the very core of humanity, yet it emerges from technological designs.

When swaying to this beauty, one must accept that technology plays a key factor in our own continued evolution. Less than an hour in length, Immunity summarized a narrative that is millennia in the making. The four-track EP Asleep Versions operates in the twilight of existence, those moments just as one escapes into the comfort of sleep and the security of a lover’s grasp.

Originally a beautifully disjointed techno affair, there is a new calm that spreads across the EP’s 25 minutes. While the timbre of opening track “Immunity” remains unchanged, the edit of “Form by Firelight” is a far more timid adventure through UK-garage than the original selection. Enlisting the support of Raphaelle Sandell, the single’s masculine bass line is now complete with its feminine counterpart. Closing track “Open Eye Signal” is also a neutered clone of its original release. Nearly five extra minutes in length, the additional instrumentation subdues the cathartic energy of the original cut. As in life, one grows to accept and appreciate those intermittent moments of solitude within the chaos.

As a whole, this remix EP sends its audience to a realm of temporary contentment, no small feat when endlessly bombarded by fears of threats near and far. Like escaping to one’s childhood memories, there is a revived sense of wide-eyed naiveté within the psychedelia that carries Hopkins’ Asleep edit of “Breathe The Air.” Its loose structure should not be taken as lazy production. It’s just as hard to sooth the anxious mind as it is to create that anxiety in music.

Asleep Versions asserts that the wall between electronic compositions and acoustic instrumentation is eroding quickly. No matter the medium, Hopkins continues to act as a sonic therapist. One cannot listen to these four tracks without taking a long pause to reflect inward.