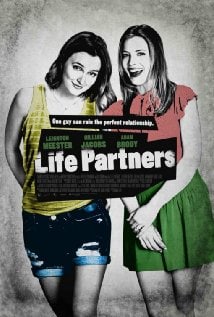 [xrr rating=3.25/5]There’s a whole lot of information dump in the first 15 minutes of Life Partners. Some of it is presented organically, like the quirkiness of longtime friends Paige (Gillian Jacobs) and Sasha (Leighton Meester) as they fake loud, profane traffic arguments as a running joke. Some of it is presented in an embarrassingly flat manner, as when Paige seems to feel the need to refer to Sasha as her lesbian best friend, as though either one of them had forgotten it. Thankfully, the film finds its legs quickly, but it is telling how often it relies on the charisma of its stars to sell the story.

Truth be told, the story is a familiar one. Sasha and Paige are deeply co-dependent friends, who understand each other on a deep level but show a staggering lack of self-knowledge. They are approaching 30, single and have a life centered around episodes of “America’s Next Top Model” and dates made through Tinder. In short, they are pretty average people. But when Paige begins dating Tim (Adam Brody, Meester’s real-life husband), a doctor with a penchant for goofy T-shirts, their friendship slowly drifts apart. It doesn’t help that Paige is an increasingly successful environmental lawyer, while Sasha struggles with an entry-level office job and vague aspirations towards a music career.

The problems faced by Paige and Sasha are at once understandable and very slight. Friends grow apart, particularly when mature romantic relationships are formed; life plans get hazy and change as you age. These things are universal enough to inform anyone’s lives but also lack a certain drama. The biggest moments in Life Partners involve a meltdown at a barbecue and a minor fender-bender with a neighbor, which is indicative of the low-stakes storytelling being told here. In one sense, the movie is admirably committed to the beats of everyday life. It’s greatly to the advantage of the film that its stars are thoroughly charming and humanizing on screen; although it might be part of the film’s hook, neither Paige nor Sasha’s sexuality is particularly important to the plot. Instead, their growing sense of distance from one another is the anchor.

Director Susanna Fogel and co-writer Joni Lefkowitz based Life Partners on their play of the same name, and also helmed and co-starred in the short web series Joni and Susanna, all of which is reportedly inspired by their own friendship. They show a lot of candor in portraying the kind of friendship that is both deeply comforting and stultifying. As it goes on, the film gradually reveals how Sasha and Paige have allowed each other to wallow in their worst qualities, but it is not wholly judgmental. Jacobs and Meester have an excellent, easy chemistry that feels lived in and genuinely makes one understand how much the pair cares about each other. That’s really what makes Life Partners worth watching.