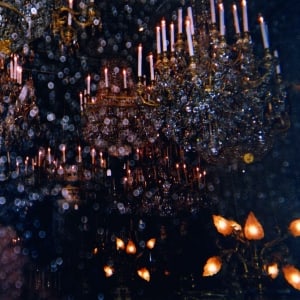 Mark Kozelek has positioned himself, quite comfortably, as the Grinch of 2014. The incessant beefs with the War on Drugs, diss tracks with venom usually reserved for rappers and verbally abuse of his audience have dominated the conversation. Of course, those familiar with Kozelek’s career found none of this surprising. He’s been a notorious crank since Red House Painters broke up. Perhaps it’s the fact that Benji gave him more press than he’s had in years, but there seem to be a load of new fans uncomfortable with Kozelek’s disposition. It’s got to be a trip then to hear Kozelek do covers of Christmas Carols without a hint of sarcasm in his voice. It’s refreshing to have Kozelek get back to the music, but maybe some acid in his notes would have made Mark Kozelek Sings Christmas Carols a bit less dull.

Let’s get this out of the way first, Kozelek covers “Do You Hear What I Hear,” arguably the single most unbearable Christmas song ever made. There’s an old Garrison Keillor skit on A Prairie Home Companion where holiday shoppers have “Do You Hear What I Hear” stuck in their heads as they slowly go insane, screaming the chorus until they have to be carted away. Unfortunately, Kozelek plays the song straight. The other songs that are over a few hundred years old also suffer. Traditionals like “O Come All Ye Faithful,” “Away in a Manger” and “God Rest Ye Merry, Gentlemen” are cringe worthy. It’s not for Kozelek’s guitar work; his nylon strings can create some beautiful backgrounds, cradling the melodies gracefully. It’s Kozelek’s voice that doesn’t fit. Kozelek’s vocal cords don’t produce what’s needed for these pure tunes, his lines are perfect for the dusky lyrics of his solo work, but when he tries to reach the high notes of “Sleep in heavenly peace” on “Silent Night” it feels off. To make matters worse, Kozelek occasionally experiments with overdubbing a dozen versions of his voice to create a choir, and it’s nearly unlistenable, especially on “God Rest Ye Merry, Gentlemen.”

The handful of tracks from the 20th century manages to be oddly excellent. “I Believe in Father Christmas,” “The Christmas Song” and “2000 Miles” are some of the best on the album. Kozelek sounds right at home when he sings “they sold me a silent night” with a sneer on “I Believe in Father Christmas.” This entire project is nearly made passable by one song. Kozelek covers the Charlie Brown “Christmas Time is Here” and it’s a stunner. In the middle of the song Kozelek breaks from his singing to speak a few downtrodden lines about hating Christmas and a friend of his interjects “of all the Mark Kozeleks in the world, you’re the Mark Kozelekiest” sounding like a Linus to Kozelek’s Charlie Brown. It simply fits perfectly. Kozelek’s weary voice nails the melancholy of the original, and his finger plucking does Vince Guaraldi’s piano work justice. Even with the slew of excellent tracks from Benji, “Christmas Time is Here” stands as one of the best songs Kozelek’s done in years. If only the rest of the album could stand up to that bar, it could have become a Christmas standard.