Strange as it may seem, there once was a time when David Lynch was not “DAVID LYNCH.” In 1984, Lynch was just another up and coming filmmaker, not one of the pre-eminent weirdos of American pop culture. With the support of Mel Brooks, The Elephant Man had racked up eight Academy Award nominations (though notably not winning any) and made a tidy profit, but aside from the little seen Eraserhead, there was no particular indication in the mainstream of just how odd Lynch’s perspective was.

As a film, Dune owes its existence to that fact. In 2014, it would belie belief that a filmmaker with two features under his belt would be handed the keys to a potentially massive science fiction film franchise (well, outside of Marvel Studios). But apparently Lynch was hot enough at the time that he had his pick between Return of the Jedi and Dino De Laurentiis’ production of Frank Herbert’s novel. Just for comparison Eraserhead was made on a $5 million budget. Dune came in at $40 million with a production crew of 1,700 people. That’s more people than those who died on the R.M.S. Titanic. But, hey man. It was the ‘80s. De Laurentiis was never one to back down from a big, stupid idea and Lynch has since said, “I started selling out even in the script phase knowing I didn’t have final cut, and I sold out, so it was a slow dying- the death – and a terrible terrible experience. I don’t know how it happened, I trusted that it would work out but it was very naive and, the wrong move.” Honest and brutal, it’s a typically Lynchian statement.

Which is interesting, considering it reflects on one of Lynch’s least typical films. Dune is a textbook example of an auteur’s voice being drowned out by the studio system machinery, even one as striking as Lynch. Strangely, Dune the film is not even particularly close to Herbert’s authorial voice. In a weird piece of reverse alchemy, the massive six-year production resulted in a film that reflects nobody in particular. It only has traces of Lynch’s queasy take on the body and hidden worlds, and mistakes Herbert’s scathing satire of the hero’s journey for the real thing. For an adaptation of one of the great science fiction epics, it feels weirdly bloodless, even when the screen is literally filled with gushing blood. 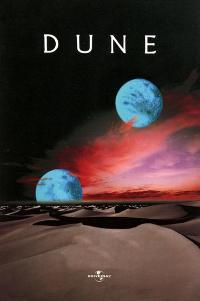 At 137 minutes, Dune feels both rushed and bloated. In part, that has to do with the massive compression of the plot, which tries to force years of narrative into minutes. But the film also proceeds at a leisurely pace that makes it seems as though all of the characters are disengaged from the violence and political machinations around them. But how can you fit a story that crosses worlds and years and cultures into a single movie? It doesn’t help that seemingly every other character in the huge cast (which includes greats like Max Von Sydow, Patrick Stewart, Brad Dourif and Dean Stockwell, who Lynch would use to far better effect in his next film, Blue Velvet) has voiceover. While the idea might have been to explicate the frequently labyrinthine plot, it seems to have only served to further distance the actors from their actions. After all, why try to figure out what someone’s motivations are if they’re going to be read aloud in a flat, affectless tone?

Dune is not wholly without worth. The opening scene in which the Padishah Emperor (José Ferrer) confers with a Guild Navigator is a truly wondrous bit of world-making; the giant, cloudy tank in which the amphibious, vaginal Navigator travels is contrasted with the golden-hued imperial courtroom, immediately creating a sense of wonder about this weird universe. The art design of the entire film is its strongest selling point, with the massive sandworms achieving a rare affinity with the novel. Some of the casting is canny, with a young Kyle MacLachlan (again used to far better purposes in Blue Velvet) playing the naïf warrior turned future despot Paul Atreides well, but Sting as his opponent Feyd-Rautha Harkonnen shows him up with barely a line. He exudes a rock star charisma even while playing a character with little to do but smirk and preen; in contrast, Kenneth McMillan as his uncle Baron Harkonnen appears to be under the impression that he is in a Grand Guignol space opera, though in fairness his oozing face sores would not be out of place in one.

It is truly peculiar to watch a film of such oddity and feel such boredom. Dune does not feel like a David Lynch movie, except for scattered scenes than only highlight how dull the rest is. As a science fiction movie, it is not particularly better or worse than any number of other generic entries in the genre, but that just makes it all the stranger. If nothing else, Dune did the world a service by souring Lynch on big Hollywood movies forever. It is like nothing he had done prior and certainly like nothing else he ever did again.