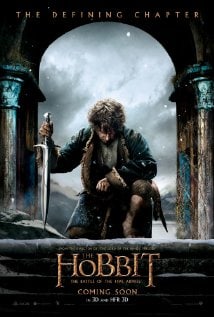 [xrr rating=3.0/5]When the world should have been excited about a new Star Wars trilogy, Peter Jackson and his Lord of the Rings movies came and pulled the plug on a galaxy far, far away. The Phantom Menace and its subsequent installations (coming at a clip of once every three years to boot) couldn’t recapture the magic of the first series, and it didn’t help that Jackson’s fantasy films were superior in every way. Now, Jackson’s Hobbit trilogy staggers to its uninspired end and the only thing fantasy fans can talk about is the new Star Wars trailer. More people care about who the hell Poe Dameron is than what happens to Bilbo Baggins after his unexpected journey. That’s what happens when you stretch a short novel into three films.

Subtitled The Battle of the Five Armies, the third part is simply that: a very, very long battle that lacks in substance but makes up for it in thrills as dwarves, orcs, wizards, elves, humans and other creatures converge and try to capture the treasure left behind by Smaug (dearly departed before the credits roll in what is one of the best sequences in the trilogy). Jackson’s film may be a warning against greed, yet isn’t greed what pushed him and the studio to tell this story in three parts?

It’s the final moments of the fireworks display time, so we don’t get much character development here. What we do get are genuinely exciting action sequences, and Jackson gives each character their shining moment in the heat of battle from Galadriel (Cate Blanchett) to Saruman (Christopher Lee) to Legolas (Orlando Bloom, shoehorned into the story for no apparent reason). Jackson’s attention to detail is impressive, especially when a project of this scale could get by on crappy CGI. But Lake-Town and the Dale are both vibrantly drawn cities, and the fortress inside the Lonely Mountain is a forbidding place of darkness and peril.

As with other films, Bilbo (Martin Freeman) is given very little to do but stand around and gawp while others fight around him. And there may not be worse character in the series than Thorin (a ham-fisted Richard Armitage), who is driven mad with greed by Smaug’s treasure. Unless the elf Tauriel (Evangeline Lilly) is worse, been created by Jackson to give the film a female character and romantic tension. It doesn’t work.

We simply expect more from Jackson and the Hobbit films. There are no emotional high points here like the relationship between Frodo and Sam in the first set of films. Jackson tries to neatly bridge the two trilogies in the final moments of The Battle of the Five Armies, but it undercuts any sort of dramatic tension. With the Lord of the Rings films, Jackson made an age-old story come to life, fulfilling the dreams of Tolkien and fantasy fans alike. This time, he’s simply fulfilling an obligation, a magician returning to a world (much like George Lucas did with the newest Star Wars) with a bag of tricks that has reached its end.