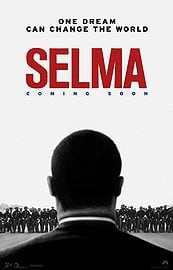 [xrr rating=4.0/5]Selma is as much of a biopic about Martin Luther King, Jr. as Steven Spielberg’s Lincoln solely traces the history of our 16th president. Yes, King does feature prominently in Ava DuVernay’s excellent new film, but Selma focuses more on a moment in history than the life story of one man. While Lincoln shows us the hard work and machinations required to pass the 13th Amendment, Selma is concerned with the events leading up to the enactment of the Voting Rights Act of 1965. But just like Daniel Day-Lewis did in his inspired performance of Abraham Lincoln, David Oyelowo’s King is a dominant force that quietly anchors all of the film’s disparate scenes.

With indie director DuVernay behind the camera, Selma may lack the big flourish of Spielberg’s film, but it is just as effective, combining the right amount of Hollywood bravado with smaller-focused independent filmmaking. DuVernay expertly tackles some of the film’s larger moments, such as a devastating failed march from Selma to Montgomery, with the same grace as the quieter moments depicting King’s relationship with his wife, Coretta (Carmen Ejogo). She knows how to evoke quietly powerful emotions from her cast, making the hammy caricatures of Lyndon B. Johnson (Tom Wilkinson) and George Wallace (Tim Roth) all the more incongruent with the rest of the film.

It’s the weight of history that gives Selma so much emotional heft. This isn’t a made-up dystopia where an entire subset of the population, recently given equal rights, still doesn’t have the ability to vote. This truly happened. In an early scene, we see Annie Lee Cooper (Oprah Winfrey) denied a voter registration card for failing to name 60+ judges in the county. She was already forced to recite the Preamble to the Constitution before the incredulous clerk finds a way to stump her. King begs Johnson for action so blacks can vote, but is denied. He takes matters into his own hands and goes to Selma, a small town with a nasty sheriff, determined to bring his cause to the attention of the American people.

The film’s emotional centerpiece takes place during the first attempt to march from Selma to Montgomery when local law enforcement attacked protesters with clubs, leading to the infamous incident on the Edmund Pettus Bridge. In a scene that pushes the boundaries of the PG-13 rating, King’s followers are gassed, clubbed, whipped and punched. But Selma isn’t a sweeping epic with one set piece following another. DuVernay also knows when to hone her focus and the quieter moments where King argues with his confidantes or struggles with Coretta over his possible infidelities are more than simple stop-gaps between the violent scenes.

King’s estate denied the filmmakers the right to use his speeches in the film, so DuVernay’s depiction of the violence really pushes buttons. It is hard to watch history refracted through a film, especially when speeches are made more stirring with rousing music. But bloodshed is bloodshed and the weighty heft of the truth makes the bridge scene in Selma that much more poignant. While Selma does show us a turning point in American history, King’s work still isn’t finished 50 years later. Black voters are still disenfranchised in many conservative states and the recent killings of Michael Brown, Eric Garner and Tamir Rice prove that King’s dream still hasn’t been achieved five decades later.