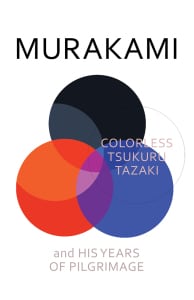 [xrr rating=4.25/5]For all the talk about fearing the unknown, when it comes to reading, people have a streak of xenophilia. Usually, it’s fixated on monsters. We are fascinated by sociopaths like Hannibal Lecter in part because they give us a glimpse of the alien; we can try on their perspectives like bizarre fashion. But immersing ourselves in a serial killer’s unpredictable inhumanity is a tainted pleasure. Haruki Murakami’s books let us soak into the strangeness of alternative characters from equally far outside our experience without the squick of disgust or guilt. Like Lecter, they have worldviews and make choices that don’t sit comfortably, but they offer no threat. Instead, they are often transparently earnest, just forged by their past into an unusual blend of blind spots and obsessions.

Many of Murakami’s books, like 1Q84 or The Wind-Up Bird Chronicles, place these figures into surreal worlds or fantastic situations. Colorless Tsukuru Tazaki and His Years of Pilgrimage takes the opposite tack with a setting that is relatively mundane, which makes his focal points that much more intriguing. Tsukuru Tazaki is less idiosyncratic than some of Murakami’s earlier characters; in fact he could merely be justifiably depressed. But his unhealthy capacity for acceptance and almost robotic affect transcend simple depression. We meet him as a man who’s ready to die, but not really suicidal because it wouldn’t match the “pure and intense feelings he had towards death.” The mystery of how he got to this point is revealed fairly early on: he was tightly bonded with four high school friends, but was ejected from that group for no clear reason. While he’s never known what triggered this, he accepts his fate stoically and incuriously, but this burden resonates through his life, robbing him of long term friendships and romances.

Murakami is adept at outlining his characters with deft calligraphic strokes and Tsukuru is no exception. The book builds on the initial hint of his underlying pathology, adding layers of detail even as new mysteries come to light. It makes sense for him to be disengaged and distrustful, but he cloaks himself in a passivity that becomes a kind of anti-egotism. The connection he had with those four friends was remarkably deep and, looking back, he has created a self-imposed mythology that contrasts his own bland normality against their more notable characters. Where he seemed unremarkable, each of them had an iconic role, as a jock or sensitive artist and so on, and each one’s name includes a color. That coincidence becomes a symbol of why “Colorless” Tsukuru was rejected. In the aftermath, he doubts himself; he isn’t even sure what his role in the group could have been and begins to believe that the wrenching loss was inevitable.

Tsukuru stands at the center, but he’s not the only character with masked motives. Shortly after losing his friends, he forms a bond with a strange young man, Haida, but this just creates a new set of conundrums, which deepen when Haida makes his own unexplained exit. The bigger mystery, though, is his latest lover, Sara, who teases out the story of Tsukuru’s past. Embodying both a Zen-like detachment and dogged tenacity, she takes an aggressive interest in having him confront and overcome his loss. She becomes an altruistic therapist but also offers the hope of love and reconnection.

With these foundational elements, Colorless Tsukuru Tazaki offers a psychological take on the classic idea of the hero’s journey, but Murakami’s terse economy and oblique side stories give the book its exotic taste. There isn’t much action, but the character development and ambiguity in the story create a shifting world of possibilities. Like placing stones on a Go board, patterns gradually emerge and create a momentum of change in Tsukuru’s life. Along the way, simple motives and clear positions become tangled. Passive Tsukuru takes action and the book approaches resolution, but he still seems a bit inscrutable. It’s hard to imagine living inside his head, but the temporary visit is refreshing and puts our own lives into perspective.

…And You Will Know Us by the Trail of Dead: IX

[xrr rating=3.5/5]Insistent and obsessive, …And You Will Know Us by the Trail of Dead writ…