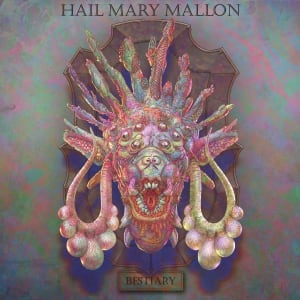 [xrr rating=3.75/5]Aesop Rock’s twisted and dense lyrical output has produced a rabid fan base of underground disciples dedicated to unraveling his verses. He’s always had a funny bone, but most of his work has been taken as serious music for serious people, despite what the man himself might have to say. However, the turn of the decade found more humor seeping into his music. First it was thanks to the help of anti-folk icon Kimya Dawson, whom he teamed up with on the oddly delightful The Uncluded. Now the catalyst is fellow New York City MC Rob Sonic, who’s been Aesop’s partner in crime for years. But Bestiary is a mind-meld between the two rappers that’s on another level. The duo teamed up as Hail Mary Mallon for the first time on 2011’s Are You Gonna Eat That?, but this release has a more polished chemistry.

Unlike another excellent and recently formed duo, Run the Jewels, Mallon is based around Aesop and Sonic tossing lines back and forth in a nearly lazy way. There’s no sign of competition, friendly or otherwise. The two are locked together in their own bizarre world. Sonic is one of the few MCs who can match Aesop for mind bending rhymes, but, more importantly, he elevates the humor on Bestiary. Bestiary is one of the funniest albums released in recent memory. The record is a pseudo-concept album glued together with skits centering on Aesop and Sonic trying to save a local bowling alley (where Aesop was apparently born, according to one of the skits). Each time their scheme is mentioned, a sound bite of the two screaming “fundraiser concert!” over a guitar solo is played. It’s used just enough to generate laughs without becoming tired, and it makes a perfect appearance at a plot twist that I won’t spoil. Elsewhere, Aesop claims his “motherfucking beard has a beard” and Sonic implies he evolved from Rick Moranis.

That’s not to say that the two can’t buckle down and crack some skulls. Sonic’s opening verse on the eerie “4 AM” is one of the finest of his career as he takes a look at a dying man on the hospital bed next to him. “The rest of the rat fam/Round and round like the death of a Pacman/Life of a salesman” he spits before closing the verse with the ominous image of “ring around the rosary.” The sleek and menacing “Krill” has the album’s best chorus, with Aesop commanding you “aim for the ribs” over punchy and delirious production. Most of the beats come from Aesop and they sound like they were unearthed from an abandoned scrap yard, all rusty percussion and growling bass.

Still, the album’s greatest strength comes from the gut-busting songs. The uproarious “Whales” has a stripped down beat for Aesop and Sonic to discuss monetary possibilities. “Money is a motherfucking joke/Forty bald eagles sewn onto a coat/Zoo with the crib, mermaid in the moat/Buy another strip mall every eighth note” exclaims Aesop before the delicious chorus of “Money, money, money, money, money, money…Motherfucker!” kicks in.
One of the recurring themes on Bestiary is the food chain, used as a metaphor for the trails of the working class and the rap game, but if the record is pushing any message, it’s that Mallon is completely removed from the food web, safely shooting spitballs at artists and fans that take this life thing too seriously.