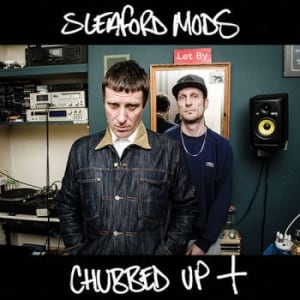 To say Sleaford Mods’ sound is polarizing is a bit of an understatement. Despite comparisons to The Fall, The Streets and other such U.K. groups, there’s no one on earth that sounds quite like the Nottingham duo. Jason Williamson’s wide-eyed and caustic rants paired with Andrew Fern’s junkyard beats made Sleaford Mods’ excellent 2014 album Divide and Exit something unique. That record served as a breakthrough for them, with international ears finally turning to their brutal and raw music. In the same year as Divide and Exit the Mods released two compilations, serving as galleries to their two musical eras. The first was Retweeted, a massive record compiling Sleaford Mods’ work from the late 2000s, when Williamson was working with producer Simon Parfrement. Chubbed Up + is Retweeted’s younger brother, culling music from the 2010s as Williamson teamed up with Fern.

Chubbed Up + is billed as “The Singles Collection” on Sleaford Mods’ Bandcamp, but it’s near impossible to imagine a Top 40 DJ spinning any of these 12 tracks, and harder still to believe that some stuffy music executive thought they were hot new singles. The group are as harsh and uncompromising as ever on Chubbed Up + thanks to blistering tracks like “Jolly Fucker,” “Tweet Tweet Tweet” and “Jobseeker” firmly placed as the albums’ highlights. “Tweet Tweet Tweet” was reused on Divide and Exit as the closing track, but here it’s placed midway through and is easily the pinnacle of the album. Williamson recounts a dismal bus drive where someone barked “cheer up you fucking bastard” at him, sending Williamson into full-on rant mode. “All you zombies tweet, tweet, tweet!” he shouts at his fellow bus takers, all of them entranced by their cellphones.

The feeling that only Williamson can see the terror of the collapsing British Empire is a constant theme. He’s twitchy as he describes “television propaganda” on “14 Day Court” and he informs the populace on “Scenery” that “the Rolls Royce engine of tax still looms and doesn’t give a toss about your fucking cancer.” Not everything has to deal with the impending doom of civilization, Williamson gripes just as easily about daily frustrations, most brilliantly on “Jobseeker.” Here he plays himself and the clueless lot interviewing him for some dead-end job. “So Mr. Williamson, what have you done to find gainful employment?” preens the interviewer, and Williamson responds with a divisive “fuck all!” before going into nasty detail. “I sat around the house wanking and I wanna know why you don’t serve coffee here,” he growls back at the suits surrounding him.

Chubbed Up + isn’t the force of nature that Divide and Exit was. Some of these songs don’t find enough fiery energy to get off the ground. The drunken “Pubic Hair Ltd” and the rusty “Bambi” are the two weakest tracks here; Fern doesn’t deliver the proper amount of grit to get Williamson at his best, even when the similarly paced “You’re Brave” on Divide and Exit turned out to be one of their finest. Thanks to the strict selection process (only “singles released on vinyl between November 2013 and January 2014” are here) some of Fern and Williamson’s best work is absent. “A Little Ditty” and “Tiswaz” are both missing, though both received the vinyl treatment last year, and the uppercut of “Tied Up in Nottz” that served as an introduction to Sleaford Mods for many yanks is absent. No, Chubbed Up + isn’t Sleaford Mods’ most vital work, but even on an off day, they’ve got more punch in their sound than a dozen other bands.