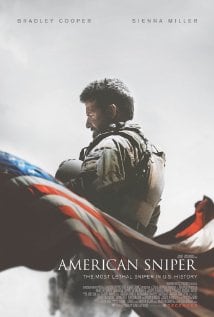 [xrr rating=2.5/5]Clint Eastwood’s sturdy, yet simplistic American Sniper doesn’t really probe the depths of a Navy SEAL who reportedly killed 160 enemies in Iraq. Based on the memoir of Chris Kyle, Eastwood’s film contains none of the emotional heft found in either of Kathryn Bigelow’s most recent films about the conflict in the Middle East. Instead, it is a mostly black-and-white look at heroism that plays out more like Black Hawk Down: technically very good but lacking in character development or even an emotional core.

Kyle, played by a bulked up Bradley Cooper, survived four tours in Iraq before being murdered by a Marine he was helping back home in 2013. The film is already courting controversy because, on top of being hot-tempered and a braggart, Kyle was supposedly also a liar, one who claimed to have not only punched-out former Minnesota governor and wrestling star Jesse Ventura, but also to have set up on the roof of the Superdome during Hurricane Katrina to pick off looters. Rather than address those claims and that side of Kyle, Eastwood simply doesn’t include anything about it. So with those niggling doubts, can one enjoy American Sniper at face value? Sure, but that doesn’t mean it is very good.

Eastwood’s Kyle is very different than the one showing up in reviews now that the film has been released. Eastwood paints him as extremely patriotic, unassuming, friendly and brave. Sure, he can get a little hot under the collar, but protecting his country and his brothers in arms is what drives this version of Kyle, much to the chagrin of wife Taya (Sienna Miller). Yet for the man who directed Flags of Our Fathers and Letters from Iwo Jima, American Sniper is just too damned one-dimensional in its approach to warfare, once again painting our Iraqi opponents as screaming butchers and villains who lack any sort of moral compass. Kyle’s very first kills in the film are a boy and his mother, but don’t worry, they are justified.

To make matters worse, Eastwood and screenwriter Jason Hall introduce Mustafa (Sammy Sheik), an enemy sniper who is Kyle’s antagonist throughout the film. Moving like a panther through the burned-out rooftops of Iraq, Mustafa never speaks. He’s a Disney villain for Kyle to contend with and nothing more, leading up to a ridiculous final conflict that is more risible than tense.

Even though the script offers him little to work with, Cooper gives a quiet, strong performance as Kyle. The character may read like a super soldier in the script, but the expressive actor finds a way to instill some emotional layers into Kyle, especially in the scenes at home between tours. Kyle is upset that people in the United States go about their business like there isn’t a war going on and Cooper shows us that the man’s true comfort zone is not in Texas, but over in the Middle East where he is protecting his buddies. Kyle does have a younger brother who does a tour with the Marines, but once he decries the war, we never see him again, shutting him out the same way Kyle no longer has a use for him.

By its end, American Sniper devolves into yet another action film. Kyle is unrepentant about the men, women and children that he has slain and Eastwood doesn’t really give his character a chance to explore the implications of his actions. Cooper and Miller do share scenes together, but they mostly feel like a time to breathe between action set pieces, including a tense finale where Kyle and his buddies are trapped by overwhelming Iraqi forces and an encroaching sandstorm. Eastwood has made movies that plumb the depths of their characters. American Sniper simply isn’t one of them.