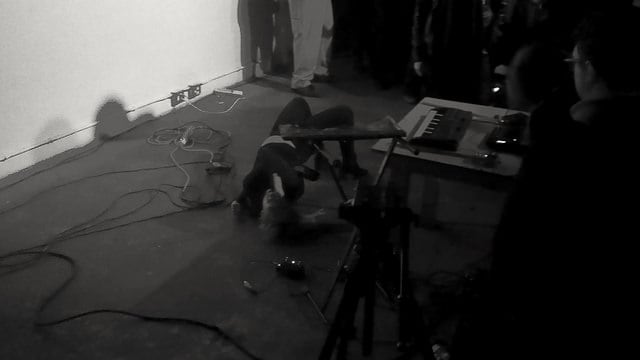 It’s rare for an experimental musician to reach the level of popularity and acclaim of New York noise artist Margaret Chardiet, aka Pharmakon. But her 2014 album Bestial Burden simultaneously provoked and thrilled listeners enough to place her among the small canon of 21st century avant-garde masters. One can only imagine how hard it must be to connect with a wide audience through noise music, a genre that most people probably read as oxymoronic, especially when it aims to be as repulsive and antagonistic as possible. But it’s also something that is seldom attempted in the mainstream. People are intrigued by Chardiet’s music whether they find it masterful or nauseating, and with that very small hook, she reels them in.

I had the chance to see Chardiet perform at Detroit’s Museum of Contemporary Art during her current gallery tour, and felt the same mix of curiosity and anxiety that her music usually provokes. I knew to expect some combination of uncomfortably loud music and intrusive performance art, but there was no real way to prepare. She began the set by banging on amplified sheet metal and firing off droning tones from a keyboard, looping each phrase until it becomes a musical mantra, drilling into your skull for minutes on end. Like Bestial Burden, her performance was exacting and meticulously orchestrated, but it still felt spontaneous, even fluid. At times it was physically painful to listen to, causing audience members to readjust their ear plugs or step to the back of the room. Everything about it was expected, but no less disorienting. It was hypnotizing.

Chardiet was openly and aggressively confrontational with the crowd, but in a way that was fascinating. She blasted a piercing screech through the already too-loud speakers and drew it out for minutes, causing a not insignificant portion of the crowd to abandon the room entirely. She walked out into the audience, encroaching on others’ space, pushing and pulling them, crawling and slithering through the sea of legs like a snake, constantly screaming into the mic. The microphone cord became a tether, something the audience had to actively jump over and move away from to avoid being tripped or strangled. Two of the venue’s bartenders stepped out from behind the bar and excitedly joined the crowd, hoping for a closer look. Chardiet wrapped the microphone cord around some guy’s neck and shoulder, draped it over his ear, pressed her head into his and pulled him across the room, shouting nondescript phrases into the mic. The man was game, smiling and following along. I guess some people just want to be fucked with.

A crowd formed in the lobby, far enough away that they wouldn’t be risking permanent ear damage. Everyone in either room was captivated, so much so that when she ended her set and walked past the crowd, no one seemed to look at her, and instead just stared blankly at everyone else in the audience. She walked out the back door into the fresh winter air and sat against the brick wall. A few concertgoers followed to congratulate her on her set. She thanked them, joked with them and talked a bit — an oddly prosaic set of exchanges. The barrier came down.

Still, the image burned in my head is Chardiet, her sweaty blonde hair clinging to and obscuring her face like a ghost from an East Asian horror movie, screaming into a microphone and yanking its cord taut like a rabid dog on a leash, slinking directly toward me as the eardrum-shattering industrial beat rattles my bones. Perhaps if the cord were longer she would have reached me, though something tells me she could have covered the distance if she wanted to. I’m still not sure exactly what I saw in that dark gallery room, even after writing it all down, but I’m pretty sure it’s going to give me nightmares. Mission accomplished.