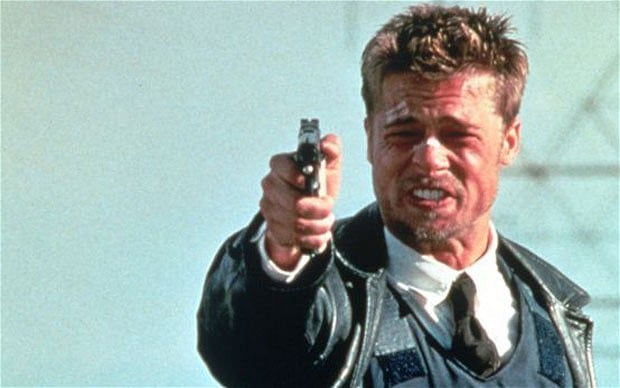 Measured against its competition at the time, no one could have been faulted for failing to predict that Seven would become the most successful American crime film of 1995. So much about it seemed redundant: it was about the meticulous hunt for a brilliant serial killer (The Silence of the Lambs was still rich in cultural currency), it featured the pairing of a retiring black cop with an eager young white one (Lethal Weapon sequels were still big business) and it was helmed by a director who had just fallen flat with his first studio film, Alien 3. Yet despite those hurdles, Seven beat its competition to become the surprise hit of the year, and is still one of the darkest movies to ever reach $100 million at the domestic box office.

It’s tempting to conclude that Seven did as well as it did, commercially as well as culturally, because it so adroitly played off elements that had worked in previous films. However, the opposite is also true. While audiences in 1995 (including an 11-year-old me) no doubt were pleasantly surprised by how skillful director David Fincher was at combining the tired elements of the police procedural into something as artfully moody and propulsive as Seven, there appears, 20 years later, to be another layer to the movie that’s universal and doggedly painful. Something critic Jonathan Rosenbaum called “indelible” and “ethically superior,” elevating the film from its genre roots.

I was watching the supremely creepy 2014 French thriller Stranger by the Lake a few days before I went back for a fresh look at Seven, and perhaps understandably, I made a few connections between the films. Both feature unflinchingly calm and patient killers; both revolve around central male-male relationships that are tense, yet mutually inescapable; both perform the impressive feat of maintaining momentum throughout every second of their runtimes by establishing a bleak yet high-strung tone (tight framing, the implication that violence is always imminent) in their opening scenes and then refusing to deviate from it. Though there’s not much empirical about my comparison (I simply watched the two movies fairly close together) I do think there is a connection to be made.

One of the characteristics that sets Seven apart from the many hunt-for-serial-killer films that came out around its time is the fact that the dark, rainy urban hellscape in which it’s set is never identified. Though cops are always center stage in the story, their badges, squad cars and stations are only marked “Police.” None of the dialogue references any particular part of the country. Screenwriter Andrew Kevin Walker wrote the movie as a cathartic response to his bad experiences in New York City, and I admit that before I realized the movie contained no signifiers as to its setting I just assumed it took place in New York, yet it was actually shot in L.A. At the end of the story, the three main characters travel out of the city and within minutes are driving on a highway in the middle of hilly golden desert reminiscent of Northern California. Great pains are taken to keep the location unspecified. While the setting is nowhere near as paired down as in Stranger by the Lake, Fincher’s insistence on making place and time illusory serves the same purpose: to maintain strict focus on the personal toll that becoming involved with a killer (he concocts horrifyingly violent methods of killing people who have violated one of the seven deadly sins) takes on detectives Somerset (Morgan Freeman, never better as the cynical heart of the movie) and Mills (Brad Pitt, also at his best as the dwindling idea of genuine virtue). 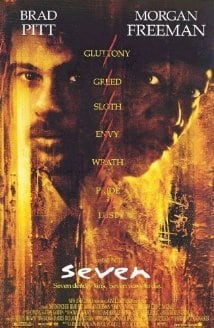 Of course, Fincher wasn’t the first director to take pains to ensure his movie couldn’t be pinned to any particular time and place. Godard (Alphaville), Tarkovsky (Stalker) and Resnais (Last Year at Marienbad) are the obvious antecedents, with Alain Guiraudie a plausible descendant. But that’s the key to the persistence of Seven, and to the fact that it’s still a movie that demands your attention 20 years after the shock of its famous ending has worn off. Seven bears a much greater resemblance to French and Russian art films than to other thrillers of its time.

In the context of 1995, Seven is one of only a small handful of standouts in its genre. The other hit crime movies of the year included Get Shorty, Heat, The Usual Suspects, Bad Boys, Casino and Just Cause. Of those six, all but Just Cause are highly individualistic films that, for better or worse, bear the stamp of a bona-fide auteur. It’s telling that ’95 was also the breakthrough year for a different director whose name, like Fincher’s, has since become synonymous with a particular style of movie: Michael Bay. But everyone knows Bay, whose Bad Boys marked the beginning of a career that has come to all but dominate Hollywood blockbusters, makes aggressively hollow fast-food cinema. Bay has zero European influences. He does not and will never make great movies. So, leaving aside Just Cause and Bad Boys, only one of the remaining four 1995 crime hits could truly be called great. That would be Casino, Martin Scorsese’s hyper-charged look at mob-controlled Las Vegas. Get Shorty and Heat are highly watchable movies by talented stylists, but today they feel like films that could only have been popular at the time. In ’95, John Travolta was suddenly in vogue again, and people wanted to see him in funny crime movies; Get Shorty is more or less Pulp Fiction-lite. Heat, with its slick style and cops-chasing-criminals plot, has the most in common with Seven superficially. But superficial is the key word: Heat plays today like a three hour music video about L.A. cool, and its showdown between Robert De Niro and Al Pacino now seems gimmicky. The worst of the bunch in retrospect has turned out to be The Usual Suspects – we’ve been so inundated with Tarantino rip-offs full of endless plot twists and meaningless timeline tweakings since the mid-‘90s that what was once seen as an ingeniously plotted whodunit now looks like the most stilted attempt at mimicking Reservoir Dogs that ever made it to theaters.

If you take my word for it, that leaves two enduring American crime films from 1995: Seven and Casino. Significantly, both are about a world in which sin and decadence have become the baseline by which society functions. Also of significance is that both were made by directors – Scorsese the distinguished vet, Fincher the unproven upstart – who wore the influences of great European movies proudly on their sleeves. If Seven’s severity and determination not to be pinned to any time and place hearkens back to Tarkovsky and Resnais – bold choices for influences in a gritty crime film – Scorsese’s over-the-top stylistics and reckless narrative momentum show his debts to Godard, Bertolucci and Pasolini. The point being, both directors took their European influences to heart to distinguish their crime movies from the more traditional fare of the day.

Did it work? Seven is still highly regarded (see Ebert’s Great Movies) and almost literally painful. Fincher, hopping mad from a terrible experience making Alien 3, was aiming for the carotid artery, and the persistence of Seven – beyond its technical achievements, stylistic rigor and iconic performances – is pretty good proof that by landing his blow he also scored a victory for Hollywood crime movies that should be taken seriously.