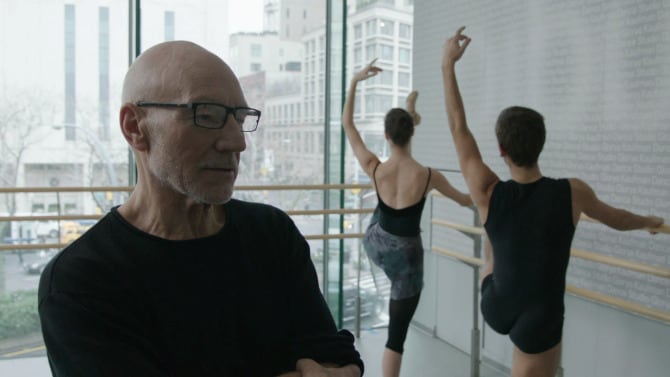 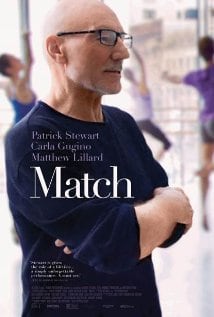 Stephen Belber’s Match is the cinematic adaptation of his 2004 Broadway play, and as such, does tend toward dialogue-heavy scenes and a minimum of sets. There are only three characters to speak of, but the touchstone of the piece is Tobias Powell (Patrick Stewart), a veteran Julliard dance instructor who has choreographed for every major opera house in the world. He is the subject not only of Belber’s story but also a vital source for Lisa’s (Carla Gugino) dissertation on the dance scene of the ’60s. The confrontational scenario is obvious from Tobi’s first meeting with Lisa and her husband Mike (Matthew Lillard), a fault which may lie more with Belber’s material than the acting. Either way, Match suffers from a far too early reveal and a denouement that is achingly contrived.

When we first meet Tobi, he seems the quintessential aged dance instructor, but behind the facade lies a far more intriguing character plagued by loneliness. Despite the respect garnered from a decades-long career and his ability to reel off countless stories about wild days and endless acquaintances, Tobi is very much alone. He has no family and no true friends, which stands in sharp contrast to his effervescent personality. With Lisa and Mike, he is all flamboyant charm and pent-up energy, a flagrant extrovert. But when asked to join colleagues for a drink and a gabfest he is the picture of a shrinking antisocial. And there is certainly more to that than the liberating presence of strangers.

Ahead of Lisa’s interview, Tobi is a flustered mess, orchestrating his wardrobe and double and triple checking that the requisite party mix will be available for his visitors’ consumption. Lisa and Mike, however, are less interested in tiny pretzels. Lisa is noticeably anxious and casts furtive glances between Tobi and Mike. Meanwhile, Mike turns on the recorder for Tobi’s interview and helps himself to a none-too-subtle search of Tobi’s apartment. His jar of fingernails cause a stir and illustrate the severely interior life of the dancer. But it’s his photos – and the lack thereof of family – that Mike hones in on. Brief niceties and a story or two about Tobi’s beginnings are quickly over, and Lisa’s line of questioning takes a decidedly prosecutorial vein. What was the sexual liberation of the ’60s like? Did many dancers have promiscuous sex lives? And Mike has several questions of his own, all focused on Tobi’s sexual experiences in 1959. Was Tobi bisexual? Did he know a dancer by the name of Gloria Rinaldi?

In one heavy-handed fell swoop, Belber’s engaging set-up is revealed to be nothing more than a blatant melodrama. Mike, the increasingly hostile homophobic cop with anger issues, more or less assaults Tobi and exits the apartment in a huff. That leaves Lisa to handle the profuse apologies and coax out the truth about Tobi and Gloria and his self-imposed solitude. Coming off of the fraught interview session, the subdued interplay between Stewart – heels firmly dug into the role by now – and Gugino is refreshing. Not that Lillard overplays his character so much as Belber wrote a very clichéd role that offers little room for elaboration. Gugino’s performance is even more limited by Belber’s thin writing, but her solo scenes with Stewart provide some reprieve. But the emphasis, regardless, is always on Stewart who carries the film and makes it bearable. While his performance initially seems uncharacteristically hammy for Stewart’s talents, with time its layers unfold and reveal that what was at first camp vanity was merely Tobi’s default mode, a defense mechanism. It’s much easier for him to present a stereotype than spend too much time inhabiting his true self.

As a film, Match is unaffectingly flat. The original text is barely expanded outside the confines of Tobi’s apartment. Belber treats the camera as a mere tool to capture his static scenes rather than bring anything to the piece. And the play’s plot twists are each undermined by Belber’s on the nose writing and the lack of subtlety in Lillard and Gugino’s performances. It seems as though Match‘s best chance for success was Stewart’s performance, and he lived up to expectations. Unfortunately, that alone cannot overcome the holes in Belber’s piece.