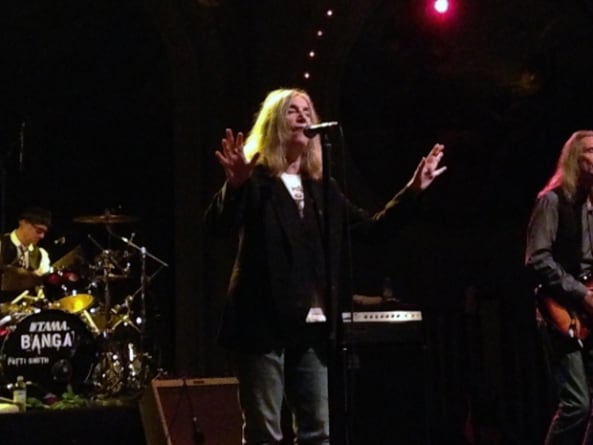 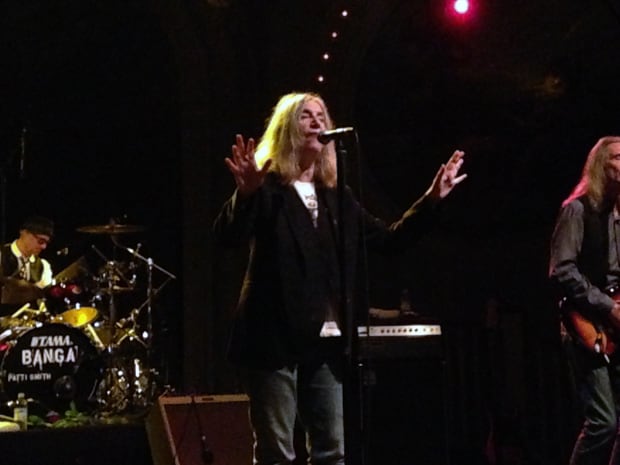 What happens when the Godmother of Punk takes Aleve before a show? According to her, a scattered performance that featured almost as much interstitial banter as it did music. Smith had a lot on her mind that evening, her monologues ranging from musings on “Little House on the Prairie” to typhoid fever to President Obama’s failings in the White House. And while Smith claims that she would rather talk about the shows on her tiny Sharp television than the bullshit that happens in Washington, Smith still delivered a blistering performance that gave power to the people and celebrated those who live outside of society.

Hair a full mane of grey, clad in an Electric Lady Studios shirt hidden by a vest and jacket (revealed at a fan’s request), Smith and her band turned in a two-hour set laden with her most beloved songs, some deep cuts and even a Nirvana cover. Smith, who hasn’t put out a new record since 2012’s Banga, doesn’t need to tour to promote a product. She has ascended to the level of icon, a living legend that sold out Portland’s Crystal Ballroom. Fans of all ages, from high school students who just discovered Horses to balding rockers clad in leather, filled the club. Many shouted along to songs such as “Redondo Beach” and “Because the Night.”

It took Smith some time to warm up, however. When she first took the stage, she seemed tentative, giving her classic “Dancing Barefoot” a cursory performance, almost as if she needed the time to propel herself into the fired-up version of Patti Smith the fans expected. She flubbed the song, going verse when a chorus was required. But the error humanized her and instead of embarrassment, Smith clasped her hands together and held them above her head, reveling in the opportunity to fuck up.

After a few songs, Smith took a break from the stage and allowed long-time guitarist Lenny Kaye to lead the band, covering Burt Bacharach’s “My Little Red Book” and Love’s “7 and 7 Is.” Smith stood in the pit, inches from her adoring fans, watching her band at work, some of whom she has worked with since her 1975 debut.

While Kaye, bassist Tony Shanahan and drummer Jay Dee Daugherty have been by Smith’s side for years, a good deal of the set was dedicated to people who are no longer here. Smith wrote “This is the Girl” for Amy Winehouse and honored Kurt Cobain’s Pacific Northwest specter with a slow version of “Smells like Teen Spirit.” However, no one loomed larger than Smith’s deceased husband Fred “Sonic” Smith, whom the singer evoked before playing “Because the Night” and when revealing that “25th Floor” was about the night they shared a kiss for the first time in a restroom.

Smith also made some fan’s dream come true during the encore. Though she performed mainly without an instrument, instead prowling the stage and dancing with Kaye, Smith appeared with an acoustic guitar to play “Banga.” Halfway through the song, she invited a fan up onto the stage, handing him the guitar. As Kaye shouted out the chord changes, the kid played along. When security tried to hustle him off after the song, Smith allowed him to stay and play along during “People Have the Power.”

Patti Smith has gone through many incarnations, from poet to the guttersnipe to mother to acclaimed author and the singer saved the best for last. After a brief, but impassioned monologue, Smith closed out the set with a thundering version of “Rock N Roll Nigger,” hair and hands a blur as she shouted out that horrific word. It was a moment of pure rage, horror and beauty. There is no more indelible way to send your audience off into the night than that.