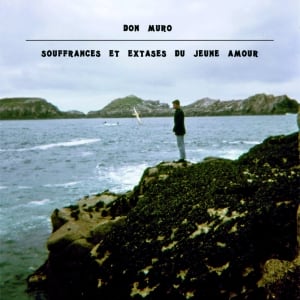 [xrr rating=4.0/5]Composer-educator Don Muro went on a tugboat ride in New York Harbor when he was five years old. “When the horn sounded,” he writes, “…I fainted and fell to the deck as if shot. I have not yet recovered. The ensuing 50+ years have consisted of attempts to recreate the effect of that sonic apocalypse.” This may sound like the mission statement of an avant-garde noise musician. But this horn-shot kid grew up to be a pop synthesizer whiz.

Flannelgraph reissued Muro’s 1977 album It’s Time in 2013. The album is a gem among recent private press reissues. This isn’t strange amateur music from the fringes, but a fully realized, thoroughly melodic and professionally arranged synth-heavy blend of prog pop and rock. It’s Time is a vibrant, layered album that’s as accessible and polished as any major label release from the era. A studio whiz as well as a synth pro, Muro performed all the instruments and vocals himself in a Todd Rundgrenesque display of versatility.

But that’s not all Muro had up his musical sleeve. Flannelgraph’s Jared Cheeks asked Muro if he could hear his early demos, and the result is an excellent lost pop album. It falls short of greatness only because of Muro’s occasionally halting vocals, which can be forgiven since these recordings were never meant to be more than demos. How did this guy not sell millions of records?

The songs on Souffrances et Extases du Jeune Amour precede It’s Time and were recorded between 1969 and 1974. The set opens with the upbeat “I Need Your Love,” which sounds like a late ‘60s hard rock chestnut. The piano ballad “Thinking of You” is a catchy soft pop ditty about a songwriter pleading his case: “With some very simple harmonies/ Let me tell you how I’m feeling inside.” Those harmonies are a key. If Muro’s naked voice isn’t up to his inventive keyboard and guitar lines, multi-tracked harmonies make him sound like the refined crooner he strains to be. This is the story his arrangements tell, like “Getting Closer,” in which Muro layers his voice in “ooh la la la” and crackling electric guitar lines. It’s one of several songs on the album that sound like forgotten AM radio hits. The album is well sequenced, varying its sound in much the way It’s Time crossed genres, this hard rocker followed by the acoustic guitar and synth ballad, “Way Back Home.” “It’s Been So Long” stars with his imperfect vocal, but when mid-song he begins to multitrack and harmonize with himself, it’s a gorgeous melodic release. “Mountain Song” ends in a beautiful synth figure that recalls Pete Townshend’s Who’s Next synths, but with more melody than texture.

I wish some of these tracks ran a little longer than the two or three minutes they run, all the better to soak up the melodies and textures. These may be sketches – Muro intended to re-record some tracks with a grand piano. But they sound nearly complete; another vocal track here, an extra chorus there, and voila: a top 40 hit. It never happened. Muro recorded one more album of originals, a collection of new age compositions. He’s a respected educator and advocate for music technology. His C.V. includes performances with better known musicians like John Scofield, Chuck Leavell and Narada Michael Walden. But I’d rather listen to Muro’s music than any of theirs.