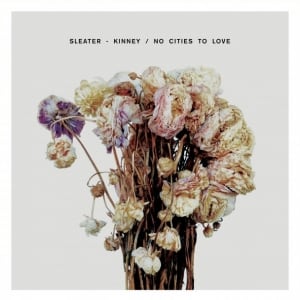 [xrr rating=4.25/5]Sleater-Kinney’s output was so consistently solid that it was easy to take them for granted. Each album presented such a unified sound that their subtle, constant evolution only became fully apparent near the end of their original run, when one took a step back to connect their raw, queercore, eponymous debut to the quasi-Zeppelinisms of The Woods. As rock fell apart around them during the post-grunge fallout and subsequent end of rock’s reign in the 21st century, Sleater-Kinney stood alone as the only dependable new standard-bearers—the Strokes were a flash in the pan, and the White Stripes had three duff songs for every great one—making their sudden absence from the scene all the more devastating.

But now Carrie Brownstein, Corin Tucker and Janet Weiss are back, and their new album, No Cities to Love, demonstrates their undiminished ability to remain the same basic group while never quite offering the same experience twice. Tucker’s wild yell sounds as strong as ever on album opener “Price Tag,” barking sentence fragments that sketch out a bleak vision of the American economy and an even bleaker view of the artist’s place in a world that has stopped considering it worthy of payment. The last vanguard of rock stars sing about a daily 9-5 grind, reflecting a new reality in which even living legends have to make their cash through other means than record sales. The track strikes a careful balance, acknowledging the band’s status as entrenched music (and, in Brownstein’s case, television) personalities while being proletarian enough to speak to their fans.

“Price Tag” fits neatly within the refined punk of the band’s early ‘00s output, but the album abruptly heads off in other directions from there. “Fangless” concerns obsessive fan worship and the tendency for a band’s most loyal followers to be its most limiting and resentful of change, and it matches its lyrics with chiming guitar riffs and synth fills. “A New Wave,” naturally, harks back to the rubbery off-punk of the new-wave era, matching punk’s energy and speed to bouncy, danceable pop. “Hey Darling” even breaks from the band’s usual ferocity for a sing-song chorus of Tucker merely belting “la da da da.” None of these is wholly unprecedented in the band’s sound, but here they show a band that is not hung up on the pressures surrounding a comeback and will chase down any sonic whim.

The biggest change in the band’s overall sound is Brownstein’s guitar work. Tucker may have barked “I Wanna Be Your Joey Ramone” on Call the Doctor, but Brownstein’s playing on this record sounds closer to Tom Verlaine. Brownstein’s guitar retains its essential melodicism, but the riffs are knottier than usual, all jangling, twisted chords that pull themselves in multiple directions while moving forward on a linear path. As if to prove its title, “No Anthems” opens with Brownstein thoroughly derailing any simple fist-pumping reaction with a stop-start mass of noise complete with brief, legato arpeggios. It’s the last thing some starstruck fan is going to use to learn the guitar, yet Brownstein never noodles or shows off guitar hero chops. (You can see her approach in St. Vincent’s recent performances, sapping all the male bravado from exceptional displays of craft as if to demonstrate that women can easily conjure the skill that male players make such a show of exaggerating live.) Speaking of Verlaine, “Surface Envy” even recalls Television’s “Friction” with its descending guitar pattern and percolating sound, a fitting instrumentation for a song that feels as if it’s drowning as the band struggles to break out from whatever preconceptions might weigh them down.

Like every Sleater-Kinney album, No Cities to Love is not coded with any obvious Greatness, something that has always been perhaps the most visible indication (apart from the obvious) that this is not a band made of men. Yet Sleater-Kinney’s albums are linked by the group’s individual and collective searches for self, a journey that initially focused on their sexual identities, transitioned into maturity with the maternal fears underpinning One Beat, and crest here as the pressures of navigating, and maintaining, fame. The title track takes jabs at hipsters who find no soul in cities to which they had ascribed importance and character, but it could also be the confession of alienation for a band who only ever sees places through the limited prism of a tour bus, hotel room and venue stage.

The closing track, “Fade,” is the band’s most piercing song since Tucker’s chronicle of her son’s birth in “Sympathy,” directly addressing the darkest fears of any band entering middle age, the possibility that their salad days are behind them and that all that remains is the long grind of being a perfunctory legacy act. But even this song refuses to wallow in self-pity: just as things get hopeless, Tucker declares “If we are truly dancing our swan song, darling/Shake it like never before” before Brownstein’s guitar explodes into the chorus. Who knows how long Sleater-Kinney will stick around, but their comeback record sees them take to their abdicated throne without incident, as if it was just being kept warm for them all this time.