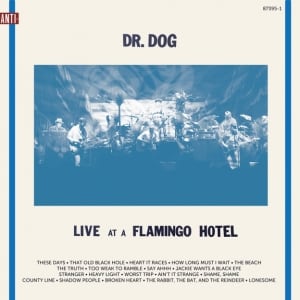 [xrr rating=3.5/5]The Flamingo Hotel is not an actual place. It’s a fictitious creation by Dr. Dog intended to evoke images of an era long since gone, delivering a mind trick that removes any sense of time or place from their first live release. They’re basically saying, “You didn’t have to be there to be there.” In many ways, the Flamingo Hotel is the perfect synonym for what Dr. Dog does as a band. Across seven studio albums, they’ve taken some of the best elements from The Beatles, The Beach Boys and The Band, and mixed them together with their own flourishes of psych, R&B and folk. Translated: if there’s any current indie band that knows a thing or two about timelessness, it’s likely Dr. Dog.

Despite the detail and intricacies of their recordings, Dr. Dog have long made a living as a live band. Fully aware of this, they sought to make Live at a Flamingo Hotel feel like an actual studio record that captures them in their element, but without coming across as a historical document. Tracks are pulled from multiple performances and there’s minimal crowd noise, while the songs themselves are brought to the forefront without the sheen of production work. Though the arrangements aren’t new, the energy is, and it more than comes through.

What may have been previously lost on record is how downright soulful Dr. Dog have become. With its slow-burning church organ and Otis Redding arpeggios, “Too Weak to Ramble” is soul music as Garth Hudson and Levon Helm would’ve done it, while “The Truth” shows the smoother, down-tempo side of My Morning Jacket. Though the gorgeous psych-folk from 2002’s “County Line” shows Dr. Dog’s roots, it’s “The Beach” that demonstrates just how far they’ve traveled since then. With creepy, jagged guitars and a swampy Cuban groove anchored by a serpentine organ passage lurking like doom beneath, it’s a track Tom Waits would be proud of. Even something more straightforward like the album-opening “These Days,” driven by twirling twin guitars that weave in and out, bristles with feeling thanks to the velvety voice of bassist Toby Leaman.

It’s those distinct vocals, along with Scott McMicken’s helium squeak, and the textures they create, that separate Dr. Dog from bands that can only pull off such complexity in the studio. The weirdness of “Ain’t It Strange” gets grounded by a beautiful covering of guitar and piano, while Brian Wilson harmonies glisten throughout before a quirky choral break leads to a massive coda. McMicken’s “Shadow People” comes alive onstage while showcasing the band’s pop sensibility. It’s only a few chords, but it’s awash with so many different vocal and instrumental layers that there’s a sense it’s constantly turning, building and building. The highlight here, though, is the unmistakably catchy and Beatles-esque, “The Rabbit, the Bat, and the Reindeer,” which gets injected with serious guitar electricity and offers evidence that there might not be a modern band that better places or executes harmonic “ahhs.”

The historical knock against Dr. Dog is that they’re derivative. That may or may not be fair to say, but when you consider where their influence comes from, a challenge should be issued to find any rock band that doesn’t have some sort of descendance from at least one of those heavyweights. The difference is that Dr. Dog can actually pull it off from both a technical and expressive standpoint, and no one can say they haven’t evolved. And as they’ve aged as a band and found their own skin, they don’t so much wear their dignitaries as stretch them into new and exciting shapes. With Live at a Flamingo Hotel, they seem to have finally found a place they can call their very own.