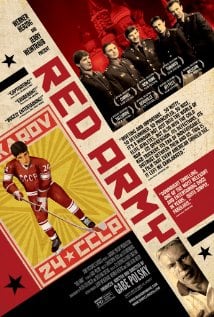 [xrr rating=3.75/5]Any NHL fan living in the ‘90s will remember the Red Army, a group of Russian skaters who played for and helped the Detroit Red Wings not only dominate the league, but win multiple Stanley Cups. In his new documentary, Red Army, director Gabe Polsky sets out to tell the story of the men who went from villains of the 1980 Winter Olympics to sports superstars in the United States a decade later, breaking down the barriers of the Cold War.

Polsky tells the story through the lens of Slava Fetisov, a legendary defensemen who helped Russia win two gold medals in hockey. Fetisov makes for an interesting subject, constantly pushing back against Polsky’s questions, making him wait while he answers text messages and even flipping the director the bird at one point. Fetisov, now in his mid-fifties and serving in Putin’s administration, leads Polsky through his history beginning when he tried out for the Russian hockey team to his successes on the ice and his run-ins with his country’s totalitarian tactics. However, Fetisov rejects Polsky’s prodding to criticize his country at every turn.

Already the subject of Gavin O’Connor’s underrated 2004 film Miracle, the 1980 Olympic match where the United States beat Fetisov’s heavily favored squad may factor into Polsky’s film, but is hardly the centerpiece. Fetisov details the grueling training sessions he and his teammates had to undergo to become such an elite squad of players, a work ethic in concert with the militaristic discipline of Stalinist Russian. Fetisov and his teammates were actually members of the Russian army who, under the guidance of coach Anatoly Tarasov, also learned about ballet and the game of chess, skills that helped them stay nimble and anticipate opponents out on the ice.

Fetisov’s remembrance of his career is not whitewashed, luckily. Following a dispute, Tarasov was replaced and his successor treated his players brutally, keeping them from their families and even smacking some in the face. Eventually, many Russian players would go on to play in the United States, either under loan by the Russian government (which would receive up to 90% of the player’s salary) or via defection. Fetisov, refusing to defect but yearning to try the NHL, went from hero to pariah after refusing to play any longer once an offer to go to America became revoked.

Red Army features plenty of archival footage, including tape from key Olympic and NHL games. Once the Russian players make it to the United States, they have to deal not only with xenophobia but a style of hockey that is more brutal than how they played back home. We now live in a day and age where Russian players commonly play in the NHL, mercenaries more interested in earning money and fame than the glory of Mother Russia. In the film’s closing moments, Fetisov mourns the death of the values of his youth, that capitalism and greed have replaced the nationalistic pride of the former Soviet Union. A boon for both hockey fans and history buffs, Red Army is a penetrating look into a country at a time where an iron curtain shut the rest of the world out, a fascinating story of men who have remained silent, stony enigmas for so many decades.