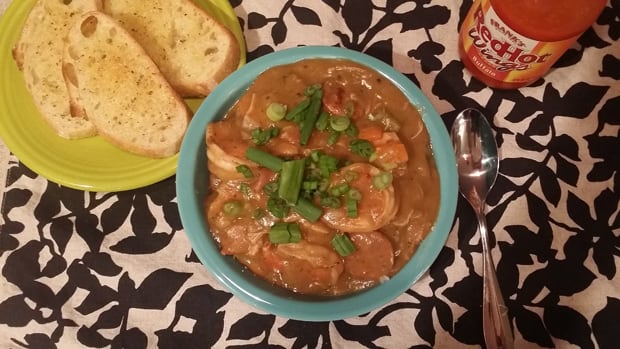 There are some foods you must often be born into loving. Vegemite, haggis, lutefisk and durian immediately come to mind. My Pennsylvania-born husband will not stop defending scrapple, though my Seattle-native stomach still can’t churn geoduck. It is within this smorgasbord of locally loved, widely hated bites that okra lives and thrives.
To everyone I know born and/or raised in the Southeast, uttering “okra” brings a hand to the heart, a sigh for a table far away, nostalgia’s perfect late summer day. Fried okra, grilled okra, okra stir fried and okra stuffed. It’s like the hatch chile, except gross and devoid of flavor.

Well, not really. I am not an okra fan. Never have been. I don’t see it much up here in the chilly Northwest, although I have friends who grow heaps of it in the summertime. When it’s around, it’s usually frozen in alien pod chunks at the grocery store. I once bought a bag years ago, when I had a minestrone recipe that called for it. They melted into my tomato broth in soggy, starchy, bitter chunks. “Let’s never make this recipe again,” my husband suggested. I wholeheartedly agreed.

Essentially, okra has been banned from my kitchen, even as I’ve slowly perfected my technique and recipe for to-die-for gumbo. Which is a traditional Southern favorite that’s much easier to love—all that fat and flour making sweet love, as many meats as you please, the one chance I get to use my Penzey’s jar of filé. Gumbo has been one of my favorites since college, when I kept cans of the Campbell’s Chunky Soup oh, let’s say, “version” under my dorm bed to microwave and serve over mushy, overcooked rice.

The inclusion of okra in gumbo is variable and contentious, as beloved foods with storied histories ought to be. Historically gumbo was made with okra, owing to the African roots of the dish. When okra wasn’t available seasonally in New Orleans, filé powder (made from sassafras) was used as a thickening substitute. Campbell’s Chunky, for the record, contains what appears to have been okra in some former stage of life.

When okra came up as the Twitter challenge, I knew it was time to work gumbo’s traditional ingredient into my recipe. Still, I love my filé and I am a veritable goddess when it comes to making a pitch perfect roux. Adding regular okra into the pot would make my gumbo less thick stewiness and more wallpaper paste. I’ve got a good thing going, and every batch takes up a lot of pricey (but delicious) proteins I don’t want to waste with a risky batch. So instead, I reached for a transformed version of the ingredient: pickled okra.

You can pickle your own okra, as either a fresh “quick” pickle or as a canned jar of goodness if you’re into that sort of thing (which I most definitely am, though right now my Ball jar collection is in hibernation). You can also buy lovely versions at the store, which is what I did last weekend. I diced the pickled okra up into fine, relish-like chunks, then added them in during the simmering broth phase. With the sticky, sliminess abated, the pickled okra was set free to lend its salty, tart umami to cut through the thick bubbly richness of the roux stew and sweet ham and shrimp. Did I bury my mystery ingredient Chopped-style? Yes indeed. Did it benefit my dish? I would argue with Alex Guarnaschelli that yes, the okra played the sour note that this decadent dish didn’t even know it needed.

So next summer, I might even be picking up some fresh-grown okra. To pickle, of course. You’ve gotta temper that shit.

In a large Dutch oven, fry the spicy sausage links over medium heat. When they’ve got a nice sear on all sides, reserve them on a plate. In the same pan, add the vegetable oil. Add in the flour, whisking the entire time. Keep whisking for about 20 minutes, until the roux develops a dark brown color, like melted (milk) chocolate. If you get it to dark cacao you’ve gone way too far and need to start over.

As soon as the roux is ready, add in the onions, celery, bell pepper and garlic. Cook for five minutes, just long enough for them to soften up a bit. Add the chicken stock, okra, cayenne pepper, Cajun seasoning, Frank’s Red Hot, Worcestershire and salt and pepper. Bring to a boil, and then allow to simmer for one hour.

After the first hour, add the chicken, reserved sausage and ham. Simmer for another hour. During the last fifteen minutes or so of cooking, prep your prawns to grill. Peel, drizzle with olive oil, and sprinkle with salt and pepper. Grill on medium-low heat on a barbecue for just a few minutes total, until the prawns are just a bit underdone. Bring back inside, take the gumbo off the heat and add in the prawns and filé powder. Stir and allow to heat through and cook the last tiny bit (added to the hot gumbo, this should be virtually instantaneous). Serve sprinkled with green onion over hot white rice.