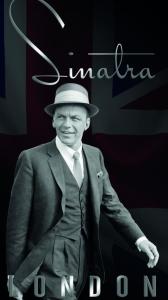 [xrr rating=3.0/5]Frank Sinatra released dozens of albums in his lifetime, and much of his voluminous output remains in print. But record companies continue to milk his legacy, repackaging previously released material and enticing Sinatraphiles with previously unreleased material from the vaults. London is the latest such tomb-raider, and the third in a series of themed sets that repackages the Sinatra catalogue geographically.

Previous entries in the series focused on Las Vegas and New York, cities that are more naturally associated with Sinatra, but the new set is more of a stretch. Most of the material on London comes from the only studio album Old Blue Eyes recorded outside the United States, Sinatra Sings the Songs of Great Britain, originally released in 1963. If the original album held a place of greater stature in the Sinatra discography, this three-disc and bonus DVD set could have easily been packaged as a mega-deluxe edition. But it’s not. Songs of Great Britain is one of the less celebrated of Sinatra’s recordings for Reprise, the label he formed when he yearned for freedom from Capitol Records. Running his own label may have given Sinatra full artistic and economic control, but Capitol was where he made his best music in the ’50s, his voice at its mature peak, with thematic concepts and precise arrangements that churned out classic after classic.

The Reprise era began well, but as the ’60s went on, the albums Sinatra made for his own label became increasingly embarrassing, his phrasing unable to disguise or take advantage of an increasingly frayed voice. Material highlighted this even more: Petula Clark’s “Downtown” was bad enough, but by the ’70s someone thought it would be a good idea if one of the great interpreters of popular music sang “Bad Bad Leroy Brown.” Unfortunately, this long decline is all that many listeners know of Sinatra, an out of touch elder statesman with bad taste, a violent temper, possible mafia ties and a Mickey Mantle haircut.

Even in these pages, a revisit of Sinatra at the Sands operates under the assumption that Sinatra was not usually associated with vulnerability. Dude, once upon a time, that’s all he was. His sweet young voice in the Tommy Dorsey orchestra may be unrecognizable to fans who have only heard the senior Sinatra, and even in the Columbia years in the ’40s and early ’50s, he still had a boyish croon. Then his career flagged, his voice deepened and changed, and he got even better.

Then he plateaued. Songs from Great Britain is good Sinatra, but even if he’s in fine vocal form, the material is inconsistent. “The Gypsy” is the kind of lightweight novelty he would have been saddled with during the Columbia era, but his richer voice deserves stronger material to work with. The same goes for “We’ll Meet Again,” a World War II era song made famous by Vera Lynn, and revived in Stanley Kubrick’s Doctor Strangelove in 1964. But songs like “A Nightingale Sang in Berkeley Square” fit the geographical concept and are a good match for the mature Sinatra tone.

The remainder of disc one consists of Sinatra’s introductions from a BBC program promoting the album. These brief tracks are spoken-word only, as presumably the songs he introduced were straight form the album. They are also blatant padding, of (slight) historical curiosity only.

Most of disc two consists of assembled session tracks from Songs of Great Britain. Sinatra calls out take numbers, excuses himself for a coughing fit, and runs through minor variations of the released tracks. These are mildly interesting, and I hope the release of these sessions spurs Capitol to try out the same thing. The Reprise albums are not nearly as iconic as the Capitol records, which fans (like me) know so well that, listening to the few session outtakes that exist, you can immediately tell when his phrasing diverts from the officially released recording. Here, except when the sessions break down entirely, you have to listen closely to hear the differences between takes. And since these aren’t essential performances, only a more diehard Sinatraphile than me might care.

Disc two closes with a previously unreleased BBC band show from 1963. The swinging “I’ve Got the World on a String” is a much livelier arrangement and performance than anything on the main event, and Sinatra’s banter with his English host shows off his comic timing. Explaining why he doesn’t play golf with Bing Crosby, Sinatra asks the host, “Would you play golf with a guy who picks up the ball and throws it toward the hole?” “No!” “Neither would Crosby.” The show includes three songs and a lot of banter in less than 15 minutes, and despite the poor audio quality may be the highlight of the set in terms of archival and entertainment value.

Disc three features a Royal Albert Hall concert from 1984. Sinatra’s voice had matured even more by this point, and his ballads can be painful to listen to (please skip “This is All I Ask”), but he can still swing on tracks like “Lady is a Tramp,” camping up words like “maaahvelous” with a vitality that shows he still cared about performing. It’s a solid live set that I’m glad I heard, but I won’t be inclined to listen to it again. After all, there’s still plenty of officially released Sinatra, from the ’40s through the ’80s (but mainly from the ’50s), that I’d like to hear again, and there are only so many listening hours left in these aging ears.