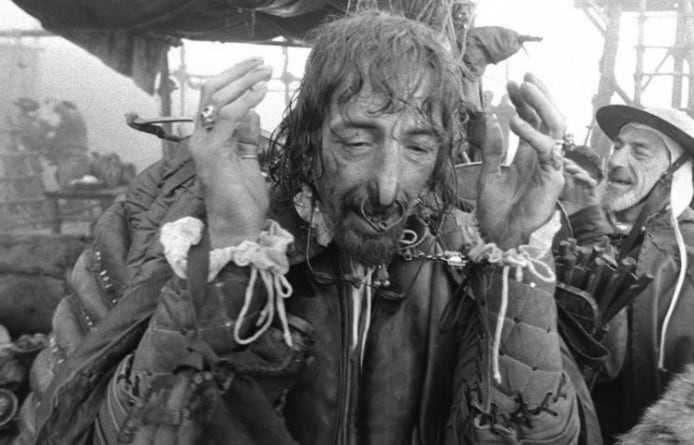 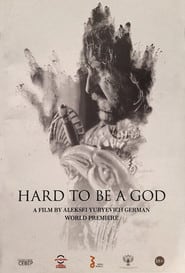 Breathtaking marvels of movement, madness and mayhem, Aleksey German’s work is both uniquely transportive and innately impenetrable, offering outlandish visions of hazily defined worlds, any traces of familiarity banished by both torrents of strange behavior and a uniquely dense approach to conveying action. His signature a floating Steadicam perspective roving incessantly through bustling, overstuffed scenes, teeming with noisy characters and incidental action, the Russian director works with staggeringly long takes, his camera worming its way into the cracks and eddies of these crowds. The cumulative effect of all this sordid color makes for movies that wash messily over the audience, denying close reading through a profusion of details, faces, sounds and textures. What stands out most is the dizzying sense of propulsion, of tales of historical change depicted from inside rather than out, a seething multitude of moving parts all contributing to a single tumultuous result.

Hard to Be a God is the director’s final project and his defining work, bigger, busier and nastier than anything he’s previously put onscreen. Set in the future on the distant planet Arkanar, it plunges into a grimy setting reminiscent of our own Middle Ages, one in which the potential civilizing force of Enlightenment has been nearly swallowed back into the primordial muck of cruelty and barbarism. A member of a now-scattered team of scientists, the surprisingly buff Don Rumata (Leonid Yarmolnik) functions as a de-facto medieval lord, striding around in furs and armor with his own crowd of underlings. Crowned as a demigod thanks to his alien status, his mission also forbids direct intervention, so he’s in charge of seeding small-scale change by protecting essential thinkers against the rising tide of anti-intellectualism, which throughout the film results in a revolting series of beatings, stabbings and lynchings.

The small kernel of story involves Rumata’s efforts to protect potential Renaissance man Dr. Buda (Evgeniy Gerchakov) from harm, which means going up against Don Reba (Aleksandr Chutko) in addition to nebulous feuding factions known as “greys” and “blacks.” Loosely based on the 1964 novel by Arkady and Boris Strugatsky, the film’s extraterrestrial setting and messily surreal primitivism seem faintly redolent of Andrzej Żuławski’s similarly sui generis On the Silver Globe. But Hard to Be a God has its own tidal rhythms, a surging flow of inspiration and denunciation which incorporates direct influences from Tarkovsky to Jancsó to Vláčil, but produces something not remotely akin to any of them.

The result of fifteen years of planning, production and strife, German proves that no one is better than he is at conveying the rancid, soul-sapping volatility of life. His films are not as much about overt conflict as the stewing scrum of confusion that precedes and precipitates change. Like the byzantine, magisterial Khrustalyov, My Car!, and the elegant, entrancing My Friend Ivan Lapshin, each set in the dark days of Soviet Russia during the lead-up to different Stalinist purges, Hard to Be a God chronicles history at a crossroads, depicting the simmering unrest before the storm. The resulting image is of a world that will either evolve or continue to churn helplessly for another few hundreds of years, with no one person having much of a say over which option occurs, miscellaneous instances of decency and nastiness bobbing about in the murky broth of collective madness. Imagining a grim reality where either a Renaissance or an extended appendix to the Dark Ages lies just over the horizon, the film portrays the instability of history, in which positive events might never happened.

This fluid focus is presented through gloomy black-and-white cinematography abundantly overflowing with liquids. Rumata is repeatedly struck with flowing nosebleeds, and his habit of smearing blood on the faces of others is a characteristic trait of a man whose presence in this world is itself an infection, despite the edict against interference. Other bodily fluids abound, with casual sprays of blood, feces, urine and vomit, in addition to a surprising profusion of milk. Beneath all of it is the muddy, rain-slicked earth upon which this pitch-black Rabelaisian farce is staged, dropped bodies, flung garbage and tramped snow all commingling in a nasty communal sludge, echoing the film’s vision of a present incessantly crushed into the past. Like Khrustalyov, My Car!, another dizzying fugue journey pointed steadily toward the abyss, Hard to Be a God ends with the muddy grayscale palette replaced by vast fields of white snow. Beyond the muddle of human turmoil lies a quiet purity, but these untouched areas are also defined by their emptiness. Wherever the footprints of existence have landed, the slop and mess of life will inevitably follow.