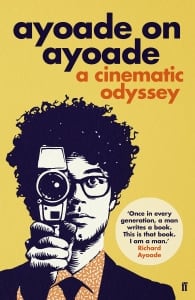 Welcome to the niche corner, as Richard Ayoade would say. The comedian and director holds no misconceptions about the vastly limited appeal of his meta-autobiographical-interview-satire Ayoade On Ayoade. He’s probably surprised it was ever published. Ayoade’s persona is that of the shy neurotic never at a loss for quips, and Ayoade On Ayoade pits him against his only true equal: himself. A laborious ten-part interview between a question-filled Ayoade and a pompous caricature of Ayoade provides the bulk of the book, serving as a satire of classic director interview series like François Truffaut’s Hitchcock and, more immediately, as a satire of fame and the business of self-promoting all couched in the midst of hilarious jokes.

The hostility between both Ayoades in Ayoade On Ayoade was perfectly reenacted by Ayoade himself in recent interview, purportedly to promote his first book. With the same interviewer Quentin Tarantino notoriously “shut down,” Ayoade instead chose the less aggressive route and snarkily parried every single question asked, refusing to engage in the promotion of his book and by extension engage in “the essential lie of the interview situation.” It was, of course, a perfect promotion for his book.

And this isn’t the first time that the deconstruction of one-on-one interviews has taken center stage in Ayoade’s work. There is a clear line from his 2006 comedy series Man to Man with Dean Learner, a satire of late night talk shows and spinoff of Garth Marenghi’s Dark Place. Ayoade highlights extreme pretention coupled with mediocrity and how that combination results in egomaniacism. Ayoade On Ayoade expands that basic theme into a predominantly humorous illustration of the cult of celebrity that rules entertainment. There is a distinct ring of truth to Director-Ayoade’s confession: “Eventually I’d like to see the interviews replace the directing because I’m becoming increasingly frustrated by the gaps between junkets. The prospect of needing to make a whole film before a stranger tapes my thoughtless utterances and uses them as the basis for a speculative, semi-hostile character portrait makes me very sad.”

When not in pretentious mode, Ayoade’s stories about his experiences in the industry and his film influences tend toward the surreal. Whether it’s moving their interview to a children’s ball pit or discussing his film ambitions blossoming even in the womb, this set up is ideal for Ayoade’s tongue-in-cheek humor. And while the lengthy interviews do become repetitive – there are only so many ways you can shut someone down and digress – Ayoade provides a running, frequently self-deprecating commentary in the footnotes as well as extensive appendixes with fake articles, essays and letters. The premise itself certainly does wear thin, but even Ayoade admits that. Interview Nine is, in fact, not an interview, but a collection of Ayoade’s self-published articles on writing techniques. He explicitly recommends the reader consume them slowly over a period of five days to prevent depression. And when the author himself seems to have become somewhat bored with all that, he also includes Terrence Malick’s fictional celebrity-obsessed tweets, a Lynchian script with tiny butlers and “film trivia.”

Very little relates to the actual film career of Ayoade who has directed Submarine and The Double. The most difficult challenge to grapple with in Ayoade On Ayoade is keeping all these Ayoades straight. It’s pointless to read into any of the material as by the “real” Ayoade, as the entire endeavor is a joke at his own expense. In context, Ayoade has simply done what so many comedians do – write amusing sketches, in this case all revolving around film. In the process, however, he has illustrated an acerbic understanding of the true and truly vain nature of pretentiousness in the film industry.