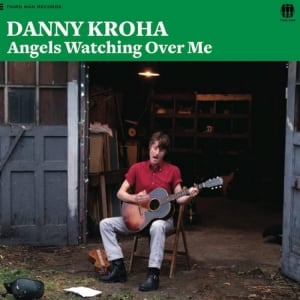 [xrr rating=3.5/5]Third Man has put out records by a diverse array of artists since it opened up shop in Nashville in 2009, from Wanda Jackson to Insane Clown Posse. (Ever seen those two mentioned in the same sentence before?) But its focus on vinyl and analog tape are defiantly old fashioned. And now they’re putting out their most old fashioned record to date: Danny Kroha’s Angels Watching Over Me. Kroha broke into the music business in the late ‘80s as one third of the Gories, Detroit’s most incendiary garage band since the MC5, kicking out the kind of grimy, blues-influenced jams that White could have only dreamed of emulating with the White Stripes. Since the Gories broke up in 1992, Kroha has played in a host of other Detroit bands, but this collection of blues covers (plus one stylistically appropriate original) is his first solo album. And when I say, “blues covers,” I’m not talking about Cream’s version of Robert Johnson’s “Crossroads.” Angels is pure gutbucket blues. Recorded in mono on a primitive four-track cassette recorder, Kroha performs solo versions of songs popularized by the likes of Leadbelly and Blind Lemon Jefferson, accompanying himself on acoustic guitar, banjo, and other old-timey instruments like the washtub bass and diddley bow. Talk about a time warp.

Kroha seems more self-aware than White about the ridiculousness of a white dude from Detroit playing Delta blues covers in 2015. “At first I thought that the last thing the world needs is another white boy singing blues, so it took a lot of soul searching, listening to other people, and listening to myself to decide that I had something to say in the field,” he recently said. He does have something to say; not something new, but something so old it’s new again, much like large beards or pitchers dominating major league baseball. When longhaired guys from England got their hands on the blues in the ‘60s, they didn’t just copy their heroes, they infused the old blues they loved with new rhythms and inflections. Decades later, blues-based rock ‘n roll is old news. Kroha’s game attempt to make a record that sounds exactly like an Alan Lomax field recording of Son House may be an inherently rote, conservative exercise, but in a modern context, it at least sounds novel.

Angels is still a pretty good record, with songs that are haunting, elemental pieces of America’s musical heritage that even casual rock fans may have heard. “You Got to Move” was covered by the Stones on Sticky Fingers, and “John Henry” has been covered by just about everyone who has ever picked up a guitar. Just as good are less familiar black church pulpit ravers like “The Road is Rough and Rocky” and “I Want to Live So God Can Use Me,” and hillbilly songs like Frank Hutchison’s “Cannonball Blues.”

Do Kroha’s versions of these songs add anything to the originals? While Kroha’s put-on “old black guy from Mississippi” vocal inflection can be distracting, his rudimentary slide licks and use of droning open tunings (which sound like he has yet to master them) are charmingly “authentic.” Still, Angels takes the concept of escapist entertainment to something of an extreme by essentially pretending the last 75 years never happened. In other words, it’s the album Jack White has been waiting for his entire life.