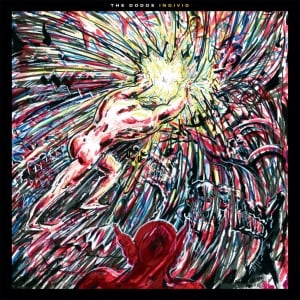 [xrr rating=3.75/5]Conventional wisdom says judging a book by its cover is folly. So too is expecting a decade-old band to sound reinvigorated on its sixth album. In both cases, San Francisco guitar and drums duo the Dodos fly in the face of accepted thought with new record, Individ.The cover drawing of a naked strongman grasping for a ball of light while surrounded by bright, swirling colors encapsulates the nine-track album’s vitality, kineticism and searching nature. It speaks to the solo quality emphasized in the album’s title and also the band’s winding road to its present state.

At this point, one could forgive Meric Long and Logan Kroeber if anger or cynicism started to seep into their work. The buzz band du jour status that followed their 2008 sophomore album Visiter faded from the rearview mirror long ago. The years since Visiter have featured a run of solid, if unspectacular, albums, a label switch and deaths of loved ones. And yet these Dodos, unlike their namesake, have persevered. Rather than view their best album as an albatross, the duo used it as a guiding light for Individ.

On their newest album, Long (singer/guitarist) and Kroeber (drums) sound like someone or something has breathed fire back into their bones. Return engagements with producers Jay and Ian Pellicci inside John Vanderslice’s Tiny Telephone studio certainly played a role in this. So too did the band’s relationship with mortality. In recent years, Long’s dad died and the band also lost touring member Christopher Reimer at the age of 26.

Gone were the questions about songs, Long said in the buildup to the album’s release. The band focused on what came naturally to them and followed this organic approach wherever it led—namely to introspective lyrics, aggressive percussion and odd time signatures.

This cast-your-cares-aside approach becomes apparent on the album’s front end where Long makes a point of emphasizing the need to let go. Not everything that seems life and death is life and death, one realizes when faced with actual death. Layers of distorted, industrial noise create a monolithic wall of sound at the outset of album opener, “Precipitation.” Depending on listener preference this intro could either be viewed as closure on a difficult time or the first steps on a brave new world. Long refuses to clutch nostalgia.

“Until now there was a reason/ Let go of it/ It’s not relevant,” Long declares when the darkness lifts. Kroeber, meanwhile, pushes the pace like a storm chaser driving in the direction of a tornado. The song shifts gears numerous times but the theme of moving on remains constant through its six-minute run time. First single “Competition” also makes use of the letting-go motif, though this time in the form of a question. “If I let you go/ Could I forget you?” Long wonders as his guitar jags up and down. For a second or two its enormous opening drum beat, propulsive and barreling, is reminiscent of the work Kroeber did on “Jodi” off Visiter.

The answer to the question Long poses on “Competition” finds a resolution, or at least it seems to, on closing track “Pattern/Shadow.” “Your shadow remains,” Long harmonizes with Brigid Dawson of Thee Oh Sees. The seven-minute finale’s succulent male-female harmonies give way to a rushing rapids of tension between Long and Kroeber that will cause sweaty kids at summer festivals to get to know one another better.

When Long and Kroeber dial down the pace, results vary. “Darkness” is more mellow and melancholy than anything else present on Individ. It sounds like an outtake of the Dodos’ previous record, Carrier, that managed to sneak onto their new album. It is the record’s only skippable track. Meanwhile, Long’s cagey vocals on the other slow-tempo track, “Bastard,” hiss and crackle like they were recorded at the bottom of a well, with Kroeber’s drums detonating minor explosions in the background.

Whether playing fast or slow, the Dodos do so without reservation on Individ. Theirs is the sound of a band many (including myself) thought was approaching its winter. It turns out, in spite of all the obstacles they’ve faced, they might just be approaching their spring.