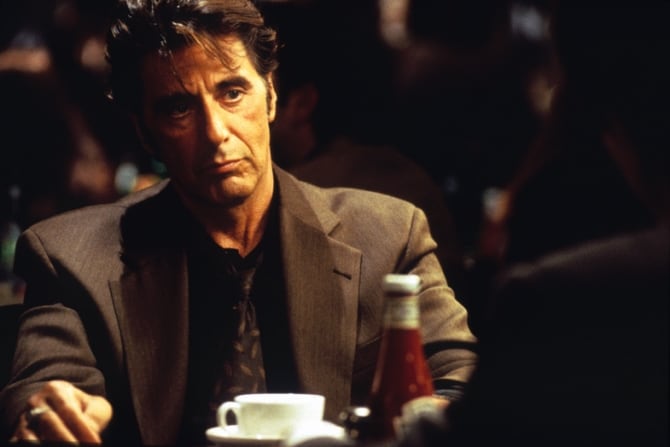 For two decades, Heat has stood as the high-water mark of action epics, aped by numerous filmmakers. (Just try and imagine Christopher Nolan’s career without it.) But as much as the film gets credit for its massive scale and its impressive balance of its ensemble cast, the X factor that makes it such an enduring work is Michael Mann’s gift for the subtleties that shade in all the helicopter shots of the Los Angeles skyline and the action scenes, supporting the outsized visuals with a grace that pretenders cannot hope to replicate.

Mann and cinematographer Dante Spinotti favor placing the camera slightly above eye level, so that even shots that stare straight at characters place them in the bottom third of the frame, leaving looming space above them. But instead of simply dwarfing the people in the frame, Mann uses the backdrops to focus attention back down to the people. Take an early scene where bank robber Neil McCauley (Robert De Niro) meets Eady (Amy Brenneman) and they talk on a balcony overlooking the city. Profile two-shots place the pair at the corner of the image looking perpendicular to the frame as the city hangs in behind them. They come to resemble gods on Mount Olympus, existing parallel to the human world but only a part of it when they choose to be. Likewise, Neil’s fence, Nate (Jon Voight), lives in a beachfront home with giant glass walls that place a border around the still blue water outside, converting the ocean into organic Rothko paintings. Location backgrounds are shot in such a way that they look like mattes, rendering the reality of L.A. as unreal, and letting the characters live in their own movie version of their lives.

If that makes the film sound escapist, it fails to account for how the fantasies of luxurious living fail to enliven the characters. Neil has made millions in his line of work, but De Niro plays him like a two-bit hood still trying to prove himself, living as if he were barely scraping by. The camera compounds his discomfort with contentment: Mann cuts from Neil kissing Eady for the first time to the pair asleep in bed after sex as Neil wakes up and slips out quietly, as if the only thing on his mind the whole time was how to get away emotionally uncompromised. (A POV shot of him pausing to look back at Eady back in bed, though, gives him away.) Vincent Hanna (Al Pacino), the homicide detective who gets involved in taking down Neil’s crew, is similarly defined by his displacement among the signifiers of success. He lives with his successful wife, Justine (Diane Venora), in a modern home filled with art that the cop clearly does not understand. Harsh deep focus frames the interiors with imposing clarity, reflecting how deeply Vincent has surveyed it to try and find a spot somewhere, anywhere, in the place where he will feel he belongs. 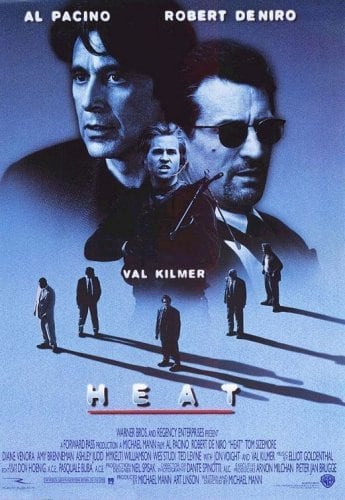 These impressionistic flashes are de rigeur in Mann’s filmography, but since Heat spreads itself out over such a large cast, such individualistic moments are restricted to minimal displays of connective emotional tissue. The editing and direction of action scenes stresses group interaction, using cause-and-effect cutting to jump from one teammate performing their task to the next person in the chain stepping in to do their part. Only at the fringes are personalities shown, usually when something goes wrong. The clinical assembly of the opening armored car heist, for example, is broken up by the psychopathy of new crew member Waingro (Kevin Gage). Despite wearing an obscuring hockey mask with the rest of the team, he becomes the clear focal point of the scene when he starts antagonizing the held-up drivers, particularly a man deaf from the explosion that blew open the truck who is framed headlong in a shot that objectively renders his obvious shock but warps the space behind him somewhat to add a vague sense of defiance to his shaking, unblinking face. Later, in the centerpiece bank heist, the perfectly executed work inside the bank falls apart outside, and Mann hangs just behind people in the ensuing firefight, at once presenting and stepping outside their point of view to heighten the chaos. Most action films love to cut from someone aiming a gun to a closer shot of their target. But by peering over shoulders with un-zoomed lenses, Mann captures the lack of pinpoint aim with an automatic rifle, generating suspense for the inevitability of civilian casualties and mayhem.

This purely visual illustration of individuals working as part of a unified or—in the case of cops vs. robbers—oppositional whole, makes Heat as much of a network film as a B-movie. The cast exists in direct relation to one another, and narrative movement often comes at the hands of ostensibly minor characters who bridge gaps between clusters of people. Chris’ wife, Charlene (Ashley Judd), gives Vincent his strongest line of attack to the gang, not through her own betrayal but by the capture of her gambling-addict boyfriend (Hank Azaria), who gladly rats on her to save his own skin, prompting her to have to lure Chris. Waingro links numerous people, from the money launderer (William Fichtner) whose stash the crew steals at the beginning, to Feds who gladly use the murderer as bait to try and nab Neil. Even throwaway characters like Dennis Haysbert’s seemingly isolated ex-con, Donald, have a purpose to play, helping to create an interlocking root system that strengthens the core of the film. Hell, even if you factor in how the movie rises and falls around shootouts, this is a greater multi-character study set against a dour, existentially-bound vision of Los Angeles than Robert Altman’s Short Cuts.

Above all, Mann consistently finds expressions of humanity that deepen this tragic tale. Waingro’s predilection for killing sex workers fits within a long history of grotesque cliché, but Mann checks his own complicity in this easy shock effect by having the girl’s mother at the scene of the crime when Vincent investigates, sidestepping the grime and shame with which Hollywood coats sex work to grieve for the murdered teenager. Donald is already an ancillary character, to say nothing of his once-glimpsed wife. But Mann respects death enough to return to her after Donald is killed in the bank heist, placing her in a bar where she must learn, through the news, that her husband returned to crime, and that he is now dead. The combination of sorrow, outrage and a desire to maintain her decorum all play out over her face in seconds.

Mann even pinpoints a few instances of love in this desperate world, albeit of a sort corrupted by hard life. Chris and Charlene squabble throughout the film, but when Chris limps back to their meeting spot, unaware that she now has police monitors, shallow focus frames close-ups of her on a balcony and him on the street below, turning the lights behind them into twinkling starlight. The violent, verbally abusive Chris looks up at her as if suddenly remembering how beautiful his wife is, and taking in his pure joy, Charlene displays her forgiveness by cutting him loose, making a subtle gesture of warning to save his life. Likewise, Vincent reconnects to his humanity by saving his stepdaughter (Natalie Portman) from a suicide attempt, though he reciprocates Justine’s gratitude by acknowledging their failed marriage and encouraging her happiness elsewhere. These are heartbreaking mini-conclusions, but they provide closure nonetheless. Even the much-vaunted coffee scene between De Niro and Pacino gives evidence to the film’s overriding desire for something better for its characters. Vincent respects Neil’s craft so much that even while he pulls the robber over to prove that he can and will eventually collar him, he also wishes to let the man go should he decide to give it all up. It’s an Old West sense of honor, the same honor that will ultimately drive Neil to forsake the possibility of life and freedom. Touches like these make Heat a rarity among the ‘90s glut of movies about L.A. and Hollywood: it is undeniably morose and tragic, but it is never cynical or glib. If only its empathy were the lesson others copied from it most often, and not just its gunfire.