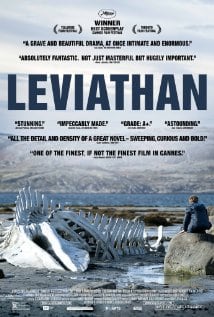 [xrr rating=4.0/5]Biblical allusions run deep in Leviathan, Andrey Zvyagintsev’s biting new film about a man waging a fruitless fight against a corrupt government in a small Russian town. Not only is its title a reference to the giant beast that shallows Jonah, but the Book of Job is evoked both by a character late in the film and the struggles of its protagonist Kolya (Alexey Serebryakov). The words “Pussy Riot,” may flash on the screen briefly, but Leviathan is a more subtle assault on the crushing regime of Vladimir Putin, the Russian president who is never mentioned in the film, but whose oppressive presence is felt everywhere.

Leviathan takes place in a small fishing village north of the Arctic Circle, a desolate, depressed town that has seen better days. It’s a place where teenagers hang out in a run-down church and men blow off steam by drinking vodka and shooting off guns. Job prospects are non-existent and the mayor is corpulent and corrupt. However, Kolya makes his money as a mechanic and enjoys the rugged splendor of the region. As the film begins, he is given notice that the mayor (Sergey Pokhodeav) has claimed his property for the town. From Moscow arrives Kolya’s friend Dmitri (Vladimir Vdovichenkov), who is everything Kolya is not: urbane, articulate, even-tempered. Dmitri arrives with incriminating evidence about the mayor, and the two men attempt to win back Kolya’s land with the information. Unfortunately, the mayor is craftier and more vicious than either man anticipates.

Zvyagintsev may be sympathetic to Kolya’s plight, but the protagonist is not entirely innocent. He can be unkind to his wife, less than generous with his friends and violent with his young son. This really isn’t a good versus evil fight in the traditional sense. Instead, Kolya is more stubborn than gallant. Zvyagintsev is no stranger to making films about characters who make immoral decisions. In his debut, The Return (2003), a young son squares off against his estranged father while in Elena (2011), a wife plots to kill off her older, oppressive husband. Zvyagintsev has no problem populating his film with unsavory characters, but that’s what makes them so interesting.

Although its subject sounds grim, Leviathan is extremely watchable, especially in its first half when it appears Kolya and Dmitri might win. But the hammer soon comes down for both characters, and Leviathan is a mostly bleak descent in its final section, especially as Kolya’s friends begin to turn on him. Zvyagintsev is out to blame not only the government and corrupt officials, but the Russian Orthodox church as well. Resistance may be futile, but Leviathan is not only a beautifully shot film, but a successful protest, even if all its characters fight the law and lose.